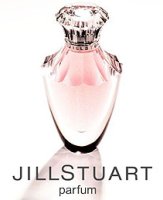 Designer Jill Stuart will launch a new trio of fragrances today at Nordstrom:

The Jill Stuart trio are all in Eau de Parfum concentration, and are $62 for 50 ml.

Missoni will launch an eponymous fragrance next March under a licensing arrangement with Estee Lauder. The fragrance will feature four accords:

Prada will release Prada Man, "described as warm and amber-based, and targets men aged from about 30 upwards", in September 2006. They will launch a lighter version of Prada for women around the same time. (via moodiereport) Update: see reviews for Prada Man & Prada Tendre.