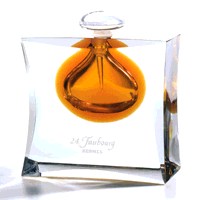 Coming this Christmas from Hermès: a stunning limited edition crystal bottle of 24, Faubourg holding 30 ml of extrait de parfum. 400 bottles will be sold at the price of 1000€, which includes an estagnon for refills. (via parfumessence) Thanks to Muskiss for the link!

Coming in November from S-Perfume: LUST, by nose Alberto Morillas, and SLOTH, by Thierry Wasser, two of the "seven scents of sin" created for the olfactory installation /7S/, which appeared at the Cleveland State University Art Gallery in early 2003. S-Perfume is also preparing to launch a new, more concentrated version of Sophia Grojsman's 100% LOVE, which will be packaged with pink scented pellets for home fragrance use. Look for that in early 2006.