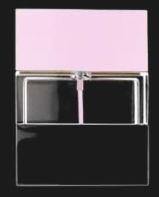 New from MAC: Pinkaura (shown), with green notes, freesia, violet, magnolia, amber, and vetiver, and Greenify, with green herbs, green fig, neroli, poppies, coco de mer, amber, vetiver, and vanilla. MV1, MV2, and MV3 have been re-issued. C-Squeeze and Violetrix have disappeared from the MAC website, but are perhaps just out of stock? (via maccosmetics)

Thank you to Marlen for the news that L'Artisan is gearing up to launch a new scent this fall based on Tunisian orange blossom, including the stem and leaf. Update: see a review of L'Artisan Fleur d'Oranger.

Nicole Farhi, the UK designer, will debut a set of fragrances for men and women this October at escentual.co.uk. (via escentual-news) Update: more information on the Nicole Farhi scents can be found here.

Tennis star Maria Sharapova's debut into the celebrity fragrance market will begin next month. Her upcoming perfume is described as "fresh and floral, with notes of mandarin, bergamot, gardenia, jasmine and magnolia". (via Toronto Star)

Riviera Concepts, the makers of the Hummer fragrances, will launch H2 this week to tie in with the GM H2 truck:

...blended by Vincent Schaller of Firmenich, [it] features top notes of cinnamon, mandarin peel and bergamot; a heart of cardamom, bourbon pepper and elemi, and a base of incense and red myrrh. It’s described as a “warmer” scent than Hummer, which has accords of thyme and fir, cardamom and peppercorn and amber and sandalwood. (via Women's Wear Daily)