The scent, created by the legendary French parfumier Bernard Chant, was tangy, feral, and almost too naughty to wear to work, but this mildly transgressive quality was a big part of the appeal. The seventies were an unbridled and messy time, when loucheness was a life style born of postwar nihilism and economic decline. If the city was crumbling around you, why not smell like death and sex, entropy and excess? The new formula does not smell like these things. It cannot clear elevators or persist through a night of heavy dancing. It evaporates quickly and smells a little like soap. Still, I bought a bottle recently, because I knew that a new Netflix miniseries about Halston (called, simply, “Halston,”) was coming, and I wanted to turn my viewing experience into a kind of Smell-O-Vision. As it turns out, the synthetic, exasperating reformulation was a perfect match for watching the series.

— Read more in The Freeing Fashion Behind the Halston Saga at The New Yorker.

Then in 2020, the International Fragrance Association (IFRA), the industry’s self-regulatory body, imposed a larger-than-usual number of bans, restrictions and specifications (such as purity criteria) on ingredients, with implementation required by early this May for new creations, and by May 10 next year for existing perfumes. (An estimated 80 to 90 percent of the perfume industry are members of IFRA and follow its standards.)

— Read more in A Big Stink in the World of Perfume at The Washington Post Magazine.

Reformulation is much more difficult than it seems, to the point of becoming an integral part of the perfumer’s job. We are often asked to alter a fragrance slightly, make a fragrance more floral, more diffusive, creamier. In the case of reformulation, we have to do the same thing. We have to change the fragrance without really changing it, without losing its character, because some consumers have been buying a perfume for such a long that they know it by heart. So the challenge is to figure out how to change without changing.

In the past, changes were driven by Mother Nature—or accountants. One caused variations in the quality and availability of natural ingredients, the other substituted less costly ones... In recent years, there’s been a third force: industry efforts to cut back on allergy-causing ingredients, to avoid labelling requirements or outright ingredient bans.

— Kim Pittaway, writing in This ain’t my mama’s L’Air Du Temps at Maclean's. 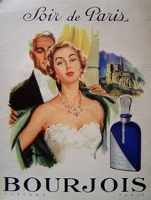 Sometime in the late-1920s, Bourjois executives sat in an office building in Manhattan and plotted how to conquer the American market. Bourjois was mostly known for its lipsticks and powders, but it had had some success in France with Mon Parfum in 1923. Bourjois was owned then, as it is now, by the Wertheimer family, which also owned Chanel.

In my mind’s eye, it was a warm day, and the rumble of traffic competed with fans whirring in the corner of the office. The visiting French executives bemoaned the bottle of chilled white wine they would have had at lunch had it not been Prohibition. “Coty has a stranglehold on lipstick in this country. Let’s try a fragrance,” one of them said. “We can get Chanel’s perfumer to do something for us, but nothing as upscale as No. 5. We want something friendlier, something that will appeal to the businessman’s wife in Iowa, or even to Margaret.”

Margaret was the stenographer…