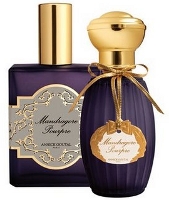 Yes, we're all sick of the endless parade of flankers, but sometimes a flanker is a welcome thing. Annick Goutal launched the original Mandragore Eau de Toilette in 2005, and I was among many who complained about its lasting power. Despite that, I eventually bought a bottle and I do wear it quite happily in summer. Later, Annick Goutal released an Eau de Parfum version. As expected, it had better longevity, but it also retained the woody-herbal crispness — perfect for hot weather — of the original. 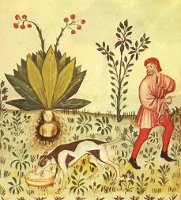 As advertised, the new Mandragore Pourpre is stronger, darker, spicier and more aromatic than the original Mandragore. There are flashes of the original's citrus and minty greenery in the opening, but almost from the start, it's done in a darker, more mysterious cast, with fruity undertones and lots of peppery spices: it has less of an outdoorsy, herbal feel. The base is a very clean woody patchouli with just a hint of incense (the notes: bergamot, mint, star anise, amber, rosemary, geranium, black pepper, patchouli, myrtle, incense and heliotrope).

Again as advertised, it should hold up to winter wear better than Mandragore. Still, it is by no means a heavy fragrance, in fact, it's considerably lighter than it probably sounds. Several times while wearing it, I got the almost-subconscious impression that I was wearing something from L'Artisan Parfumeur, if that helps anyone — Mandragore Poupre would fit nicely into their Les Epices de la Passion series, and if your experience with Annick Goutal has been confined to the more feminine florals, it may come as something of a surprise. As for me, I like it, even like it very much, but I haven't yet decided if I love it. It took me two years to decide I needed a bottle of the original Mandragore, so perhaps I'll do a slow burn on this one too.

Annick Goutal Mandragore Pourpre is available in 100 ml Eau de Toilette, and is sold in the square bottle for men or the gadroon bottle for women (the juice is the same, so pick the bottle you like best). The lasting power is reasonable for an Eau de Toilette, and much better than Mandragore's, but it still isn't a powerhouse of longevity. For buying information, see the listing for Annick Goutal under Perfume Houses.