Now it’s the same phenomenon with the niche business. It’s becoming like a ‘designer world’….If niche is becoming a designer world, I’m out of it. The industry is making the same mistake with niche that the made with designer — meaning too much, too many, no editing and no selecting. It’s not presented the right way.

— Laurice Rahme of Bond no. 9 on why her brand is tightening their distribution (among other things, they will be pulling out of Nordstrom) and opening more dedicated boutiques (20 more are planned over the next 5 years). If you have a subscription, you can read more at Bond No. 9 Plots Retail Expansion, Growth at Women's Wear Daily.

Laurice Rahme of niche line Bond no. 9 will be at Saks Fifth Avenue in New York on Saturday, March 10. Drop by any time between noon and 5 pm to have your bottle signed; there will also be a special gift with all Bond no. 9 purchases.

Eau Dear: Sniffing Out the Big Apple's Smelliest Spots in today's Washington Post looks at some of New York City's more aromatic attractions, and no, they don't mean perfume stores. Columnist David Segal takes Laurice Rahme of Bond no. 9 on a "hunt for stupefying aromas -- a stink safari, if you will". Many thanks to Ruth for the link!

Listen to Laurice Rahme of Bond no. 9 and perfumer Maurice Roucel talking about "The Smell of Success" on WNYC radio. Scroll down to the third segment; it is about 26 minutes long. Much of the discussion centers on the Bond line of fragrances, but there are also some interesting tidbits about more general perfume-related matters. Many thanks to the anonymous person who sent me the link! 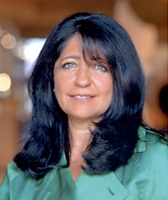 Bond no. 9 was founded in 2003 by Laurice Rahme, and features perfumes inspired by various New York City neighborhoods. Ms. Rahme was born in Paris but has lived in New York for over 25 years. She was formerly the president of Creed USA, and has also worked for Annick Goutal and Lancome. Bond’s next fragrance, Bleecker Street, is scheduled for release on November 1st.

Bond no. 9 has been on a mission to capture the essence of New York City’s neighborhoods in fragrance. While this has been done elsewhere on a much smaller scale (Yves Saint Laurent’s Rive Gauche, for instance), it is an unusual basis for an entire line. What inspired you to take this approach, and did people initially think you were crazy?
After September 11, I wanted to do something for New York, my adopted city. (My birthplace is Paris). Inspired by the French perfumery of the 20th century, who developed dozens of scents for different neighborhoods (Jardin de Bagatelle; Champs Elysees; 24, Faubourg; etc). People did not think we were crazy. On the contrary they gave us a list of neighborhoods they would like and we are trying to trademark many of them…