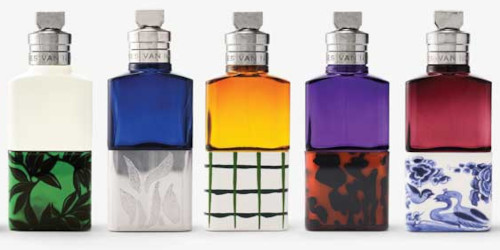 Fleur du Mal (shown top, second from right)~ developed by perfumer Quentin Bisch; a fruity floral leather with osmanthus and suede. [“I wanted to create a perfume of contrast using osmanthus which has a duality and unexpected quality. It appears innocent but it can be very sensual, almost animalic; this flower, that seems to be an angel, can turn devilish.” — QUENTIN BISCH. Additional notes include peach, jasmine and amber.]

Neon Garden (shown bottom, second from left) ~ developed by perfumer Fanny Bal; an aroromatic woody floral with mint and powdery iris. [“I wanted to express unconventional classicism through using orris, from iris root, which is so elegant and haute couture. But I wanted to shake it, to heckle it, with the energy of mint.” — FANNY BAL. Additional notes include carrot, musk and ambroxan.]

Raving Rose (shown bottom, second from right) ~ developed by perfumer Louise Turner; a spicy green floral with rose plus black and pink pepper. [“The rose is an icon for Dries but I wanted to disrupt its classicism to create a rose that is not a rose, not taking itself too seriously, ultra-modern and spicy.” — LOUISE TURNER. Additional notes include cashmeran and musk.] 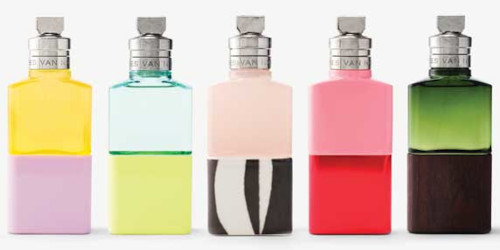 Rock the Myrrh (shown top center) ~ developed by perfumer Amélie Jacquin; a woody amber leather with myrrh and smoked wood. [“Inspired by the Parisian boutique, with its elegant and precious textures, and its eclectic and mystical atmosphere, an overdose of myrrh is joined by resins of benzoin and cistus dressed up with cypress and pink pepper.” — AMELIE JACQUIN. Additional notes include patchouli and suede.]

Rosa Carnivora (shown bottom center) ~ developed by perfumer Daphné Bugey; a spicy woody floral with rose and vetiver. [“This is nature: unfiltered, with all its little flaws. This rose is not romantic: it is strangely beautiful, real, imperfect and ambiguous.” — DAPHNE BUGEY. Additional notes include pink pepper, floral bouquet, patchouli and cistus.]

Santal Greenery (shown top left) ~ developed by perfumer Nisrine Grillie; a woody green musk with fig and sandalwood. [“The union of two opposites, yet perfectly and poetically balanced: resilient sandalwood with the lively, green leaf of fig - the everlasting and the ephemeral together.” — NISRINE GRILLIE. Additional notes include bergamot, grapefruit, violet leaves and white musk.]

Soie Malaquais (shown top right) ~ developed by perfumer Marie Salamagne; a spicy floriental with chestnut and vanilla. [“I fell in love with Dries’ silk dresses in his Quai Malaquais boutique. The texture was so fluid it merged with the skin, which gave me the idea for a silky, enveloping perfume, a mix of chestnut with sensual vanilla.” — MARIE SALAMAGNE. Additional notes include bergamot, blackcurrant, rose, silk and cocoa.]

Voodoo Chile (shown top, second from left) ~ developed by perfumer Nicolas Beaulieu; a green woody with notes of rosemary and patchouli. [“I was inspired by the iconic Jimi Hendrix track. Rosemary and patchouli are the opposite forces in action here but the rosemary – like Hendrix’s guitar - is distorted to make it hot and dense.” — NICOLAS BEAULIEU. Additional notes include cannabis accord, lentisque, cedar and sandalwood.]

The Dries Van Noten fragrances will be available in refillable bottles (plus collectible cases), in 100 ml Eau de Parfum (around €220-240 each). I will update with more details when I can.

Update: additional information above in brackets via eu.driesvannoten. The refill bottles are 200 ml, and three discovery sets are available (two have five fragrances each and are €32; one has all ten fragrances for €48; all samples are 2 ml), all entitle you to a discount on a full-sized fragrance.