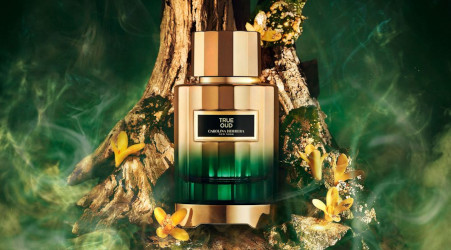 This newest addition to the Eastern Treasures line was inspired by Carolina A. Herrera's travels to the Middle East and the Arab perfumery traditions passed down by her mother. Perfumer Jordi Fernandez explored the least known facets of the ingredient, its floral features, which he combined with a woody cocktail of base notes that, when bottled, recreate the same nuances as Oud used in the air like incense.

"We needed to achieve that aroma because it’s what really defines experiences among family and friends and what creates those moments at home. And because it’s a much more intense aroma than an essential oil,” the perfumer explains, “we needed to work with Oud that can be produced sustainably so that it doesn’t lose its strength and purity over time.”