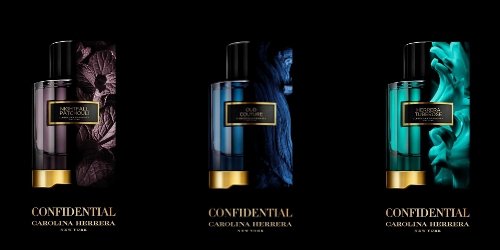 Herrera Confidential embodies an irresistible combination of elegance, emotion and authenticity, infused with New York and Latin heritage. Herrera Confidential is the epitome of quality, luxury and style. Inspired by the classic inkwell, noted as a symbol of creativity, each bottle in bold jewel tones, is handcrafted with impeccable detail and elegantly designed.

Herrera Tuberose ~ "Tuberose: Adorned For Beauty. Tuberose is the queen of white flowers and the symbol of herrera’s timeless elegance. The designer’s secret to confidence and timeless appeal is simple - always stay true to yourself. Tuberose, a key ingredient in the first herrera fragrance launched in 1988, has been reinterpreted in its most opulent form – a modern tribute from herrera’s daughter to her mother’s original signature scent. Floral, sensual and intense, indian tuberose is warmed by a blend of the finest orange flowers, deliciously infused with vanilla."

Burning Rose ~ "Burning Rose: Grace Under Fire. Red symbolizes passion and love, but it also has a deeper meaning: it is the colour of celebration, an explosion of energy and vitality. Burning rose evokes nostalgia of a creative and revolutionary moment in new york city’s 70s and 80s history, when conventions were challenged in favour of bold new ideas and pop culture. Burning rose embodies the star qualities of charisma, elegance and glamour. This elegant rose from bulgaria is infused with the highest quality spices: royal cinnamon from laos, and ginger burned with patchouli from indonesia."

Nightfall Patchouli ~ "Nightfall Patchouli: The Heat of the Night. This fragrance was inspired by the magic and mystery of the night, from enchanted evenings in the arabian desert to the vibrant energy of new york after dark. Nightfall is the time when anything can happen, opening up the imaginary, an inifinite world of possibilities between reality and fantasy. What sets this scent apart is its unique blend of contrasting resins and spices. The deep softness of benzoin resin meets the vibrancy of forbidden cinnamon, with a mysterious enigmatic hint of indonesian patchouli leaves. It’s a celebration of those who dare to see things differently."

Oud Couture ~ "Oud: World Of Endless Possibilities. Extracted from agarwood, thought to be the most precious of all woods, oud couture draws inspiration from middle eastern culture with a modern twist of new york”s cosmopolitian spirit and style sensibility. This seductive scent is a new interpretation of a legendary oriental ingredient. The hallmark of this emblematic fragrance is the scent of laos oud. A blend of opulent resins and taif and damascena roses, oud is transformed into an inspiring and electrifying scent. Just like in new york, a world of endless possibilities."

Neroli Boheme ~ "Neroli Boheme: Whimsical Spirit. This passionate fragrance pays homage to whimsical and carefree days spent at carolina herrera’s venezuelan family estate, le vega – a rich and verdant setting where elegance and relaxed style effortlessly harmonized. La vega played host to close friends and family from around the globe to enjoy lavish parties and intimate gatherings. The lush emerald gardens, vivid sunsets and breathtaking landscap created the backdrop to indelible memories of a distinct time and place where every sense was captivated. Here the neroli is bohemian, playful and sensual - a chiaroscuro composition of italian citrus fruits for bright freshness, nightfall indian jasmine for depth."

Amber Desire ~ "Amber Desire: A Timeless Obsession. The story of amber desire started with ambre 83, an emblematic and elementary perfume base created at the turn of the 20th century that became part of classic oriental fragrance structures. Today, the herrera house has reinvented this iconic base giving it a modern twist with an intoxicating fusion of date, rose absolute, vanilla and labdanum. The result, a purer, brighter and more powerful interpretation of a classic perfume note. Traditional yet innovative. Timeless yet modern."

The collection will also include four essential oils which can be layered with the six fragrances. I will update with sizes, concentration and prices when I can.

Update: the oils are oud, musk, rose and sandalwood.

Another update: In the US, the series will be sold at the Carolina Herrera boutiques in New York, Dallas and Los Angeles; $240 a bottle. They are packaged in 100 ml Eau de Parfum.