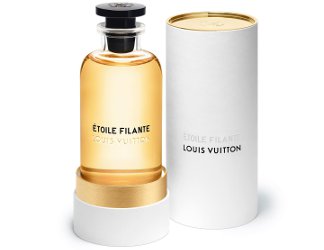 A ball of fire in the heart of night, the shooting star shines bright in the heavenly vault. Its odyssey through the infinite culminates in a furious race, illuminating a night as black as ink and tracing out a radiant future — one that brings people together. A dancing star that dazzles; a metaphor for a borderless journey that connects one with oneself as much as others. This symbol of joy and gaiety spreads a universal message of hope, as an invitation to shine and, thanks to its resplendent panache, turns the most precious of dreams into reality.

Pure creation is nourished by memories — of journeys and encounters, of moments suspended in time that remain forever engraved in the mind. To capture that ray of joy, transcribe it into perfume and let it radiate on the skin, Jacques Cavallier Belletrud chose osmanthus, a flower that is venerated in the Far East and which the perfumer has adored since childhood. “Osmanthus absolute was my first revelation among raw materials when, at 11, I discovered it in my father’s laboratory in Grasse. Its marvellous scent, as well as a name that evokes distant horizons, immediately fascinated me,” he recounts.

Louis Vuitton Étoile Filante will be available in 100 and 200 ml, and in travel sizes.