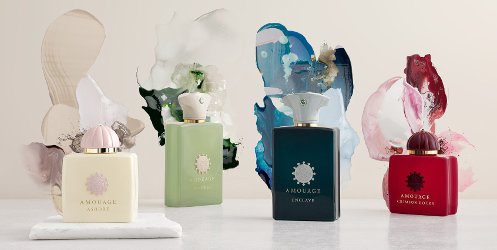 Drawing inspiration from its home country, the Sultanate of Oman, these sophisticated blends of exquisitely contrasting scents are a liberating force of imagination...The Renaissance Collection arouses a surging emotion of inner connectivity drawn from the Sultanate’s breathtaking nature, evoking picturesque contours, colors and essence.

Ashore (above far left) ~ "On the coast of Ras Al Jinz, mid-summer, when the sun is in the middle of the sky, Ashore, depicts a mirage of the senses. As one’s eyes are saturated with light, a surreal brightness blends all that is around them, leaving only the wind that carries the scent of spices from the East. This intoxicatingly white floral fragrance of Jasmine, Ambergris and Sandalwood offers an olfactive interpretation of the union of the sun, the sand and waves while the Cardamom and Turmeric recall the scent of spices from India." Perfumer Mackenzie Reilly; additional notes include pink pepper, solar accord, rose and olibanum.

Crimson Rocks (above far right) ~ "Crimson Rocks conjures the majesty of Al Hajar mountains in all their glory at dusk. Standing tall at the top, one is engulfed by a sweet sense of peace. For this fragrance, Amouage brought to life an intense Rose, one that is resilient to withstand extreme weather yet gentle, welcoming and just like the mountains it calls home, rooted to stand the test of time. Texturing the Rose are red notes of Cinnamon and an earthy Jujube Honey Accord which along with Oakwood and Cedarwood paint the Al Hajar mountains in deep crimson hues." Perfumer Domitille Michalon-Bertier; additional notes include pink pepper and vetiver.

Enclave (second from right) ~ "As the last sun rays bid farewell to fjords of Musandam, Enclave sophisticatedly portrays the freshness trapped inside a rich, earthy warm hideaway where land meets the sea. Blue and green notes of Spearmint and Cardamom Oils transcend the fragrance stages, giving it a freshness that lasts forever, while the pleasantly surprising Amber, Labdanum, Cinnamon Oil and Saffiano together with earthy Vetiver capture the surrounding hot mountains at that precise moment in time." Perfumer Julien Rasquinet; additional notes include pink pepper, rose, patchouli and olibanum.