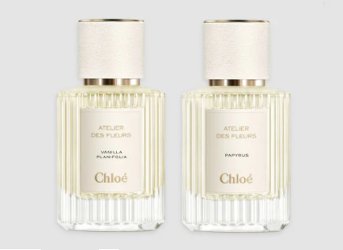 Papyrus ~ a fresh green fragrance with dry and smoky woody accents, developed by perfumer Alexis Dadier, and inspired by a papyrus scroll decorated with hieroglyphics that his grandparents brought him from a trip to Egypt.

Tuberosa 1974 ~ a reissue of the original Chloé fragrance, introduced under Karl Lagerfeld in 1974.

Chloé Vanilla Planifolia, Papyrus and Tuberosa 1974 are available in 50 and 150 ml Eau de Parfum, and can be found at Galeries Lafayette in Paris.