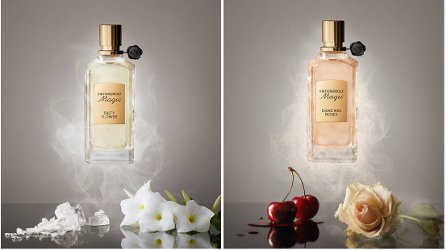 Has the "luxury collection" trend died down yet? I started tuning it out a long time ago, certainly before Robin posted about the Viktor & Rolf Magic Collection three years ago. The original six fragrances in that line — "a collection of six transformative illusions in the spirit of an enchanting universe from fragrance magicians Viktor & Rolf" — arrived in stores in early 2017 and I never bothered to try them.

Since then, the collection has shuffled and expanded a bit. (The price also seems to have dropped substantially.) I received a sample of Salty Flower with a Sephora purchase and spotted a positive comment about Dancing Roses in a friend's Instagram feed, so I tried that one too. Guess what? They aren't ground-breaking or life-changing, but I liked both of them. And with the price drop, they suddenly made a lot more sense to me.

Magic Salty Flower, launched in fall 2018, was developed for Viktor & Rolf by perfumer Marie Salamagne. It's described as a "surprising salt flower born from frangipani and tiare petals diving into a salty potion. A solar addiction playing with contrasts, between thrilling iodic freshness and sensual creamy texture." Additional notes include bergamot and orange blossom.

Salty Flower is part beachy floral, part solar oriental. If you liked Calvin Klein Reveal (discontinued a while back) you'll probably have similar feelings about Salty Flower. The buttery white florals are more noticeable for the first hour or so, with just a breath of creamy citrus, before the "salty" aspect starts to dominate. Then what you have is an iodine-tinged amber, a little bit sweet and a little bit mineral-sharp. The dry down is vanillic woody-musk. On my skin Salty Flower has excellent longevity and noticeable sillage.

In Magic Dancing Roses, developed by perfumer Sonia Constant for the original Magic line-up, rose "is transformed into a delectable liquor, thanks to juicy and fleshy cherries dipped in a white cognac infusion. The addition of saffron accord and a dry leathery suede note enhances the blend with incomparable elegance." Additional notes include bergamot, pink peppercorn, lychee, tonka bean, musks and amber. True to its promise, Dancing Roses starts off smelling just like a cherry cordial that you'd drink from a tiny crystal goblet. I do enjoy the occasional cherry fragrance, especially something fun like Hilde Soliani Una Tira L'Altra, so this is fine with me.

I'm actually a little disappointed when this fragrance "dances" off in the direction of rose, even though its interpretation of rose is pleasant enough--- — saffron-tinged, slightly jammy, then turning drier and ending up as a contemporary rose-chypre. I wouldn't be surprised if the idea of simplified Frédéric Malle Portrait of a Lady had come up during the development of Dancing Roses. On me, this fragrance has average longevity and lots of sillage in the first hour but less after that.

I've never been a fan of Flowerbomb or its various flankers, and Bonbon was a total scrubber for me. However, these two Magic fragrances are more my style, even if they're somewhat derivative. Have you tried any perfumes from the Viktor & Rolf Magic Collection? What did you think?