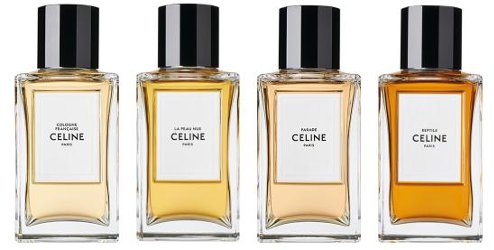 All the perfumes are linked together by one singular olfactory imprint. A powdery note dominates the collection, shading the singular features of each composition. Like a diaphanous veil placed over the skin, this powdery filter provides each perfume with an enveloping patina and the French elegance of a couture trail.

Black Tie ~ "A couturier’s perfume, the exact olfactory interpretation of his style in relation to fashion: his obsession with black and a tailored silhouette. An androgynous composition, around vanilla as dense and as crisp as grain de poudre or lacquered satin. Fashioned like a dinner jacket, cedar and tree moss structure its allure, while the powdery caress of orris troubles body and mind." Additional notes include musk.

Cologne Française ~ "A trompe l’œil cologne, deceptively understated, aristocratic and singular. A composition playing on dissonant accords. The top note redolent with the addictive mellowness of neroli and the sensuous bite of fig tree, then the elegance of a veil of powdery orris and the tender patina of tree moss." Additional notes include musk.

Dans Paris ~ "The promise of Paris when you are just 20 years old and feeling that the city belongs to you. A top note exuding the suave vivaciousness of bergamot and coriander seed. A boat trip along the Seine in radiant sunlight. Like a tracking shot from a movie on Parisian facades, leaving you floating on air, enveloped in an addictive accord of vanilla and powdery laurel blossom." Additional notes include orris, musk.

Eau de Californie ~ "An acoustic and solar perfume in tribute to California where Hedi Slimane lived for more than ten years. The memory of palo santo, that magical essence of wood, with fresh, smoky and creamy facets. In the background, the powdery notes of orris and tree moss give this Californian dream the signature of a Parisian couture house." Additional notes include bergamot and patchouli.

La Peau Nue ~ "Reminiscences of those 70’s icons, those Parisian heroines with their movie-style elegance. A slender and impeccable allure, the eyes rimmed in black and the skin blushed with the velvety-smooth accents of orris and rose. Like an image fading over time then invading the memory, the floral intensity lightens under the softness of powdery notes and the depth of vetiver." Additional notes include bergamot and rice powder.

Nightclubbing ~ "A perfume for night birds fed by the memory of Parisian nights during the palace and bains douches era. A galbanum top note immerses us in an electric atmosphere with accents of nicotine, on a musky and addictive patina, somewhere between the scent of crimson velvet seats and the sensuality of the nape of a neck fragrant with vanilla." Additional notes include orris butter, patchouli, tree moss and musk.

Parade ~ "A musky, powdery cologne in keeping with the very codified ritual of male sartorial appearance. An attribute of the great dandies from 19th century literature right up to the musicians on the pop and rock scene since the 60s. A return to the idea of transmission and of a very French kind of perfumery. A parade under the sunlight of neroli and the radiance of bergamot, a carefree and sophisticated mix imparted by musk and oak moss, a feminine facet revealed in an addictive and powdery residual trail." Additional notes include vetiver.

Reptile ~ "A beguiling and musical perfume for center-stage. The olfactory twin of the stage outfits and rock star portraits that Hedi Slimane made throughout his life as a couturier. Like a kaleidoscope of black around tree moss, featuring facets electrified by other notes… a top note with the elegance of cedar, then the toxic and mysterious charm of leather and pepper, trailing into an addictive musky and powdery patina."

Saint-Germain-des-Prés ~ "The eternal youth of the Left Bank and their allure, looking like heroes from a novel and the movies, young people Hedi Slimane never tires of observing, sitting in a café at Saint-Germain-des-Prés, his favorite part of Paris since he was 20 years old. Saint-Germain is recaptured in a perfume. The insolence of petit grain, the delicateness of orange blossom faceted by heliotrope and vanilla, as sweet as marshmallow or a puff of icing sugar, underlined with the elegance and nobility of orris."