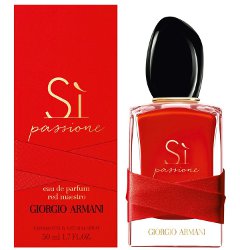 The limited edition Sì Passione Red Maestro, galvanized by a solar jasmine accord, is a vivid interpretation of Sì Passione. The iconic red bottle is decorated with a red satiny ribbon inspired by the Haute Couture collections.

Sì Passione, the fragrance for women by Giorgio Armani, unleashes the empowered, feminine passion of the Sì woman. The exclusive limited edition Sì Passione Red Maestro allows each woman to assert who she really is - to liberate the power of passion. It is an open invitation for women to drape themselves in passion as a declaration of desire, love and life.