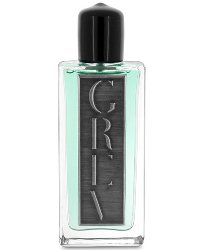 The Slumberhouse website describes Grev as “a transparent metallic/herbal accord of star anise, crisp apple peel, spearmint leaf, ocean pine and bergamot twisted into hollowed tunnels padded in turquoise hues, dusted in sweet mossy mineral powder and blanketed with copaiba resin and sandalwood oil.” I describe Grev as a minty shiv straight from the freezer.

Grev is one of the four fragrances Slumberhouse issued when the perfume house debuted in 2011. A generous splash from my sample tube gives green apple for a split second before mentholated mint and pine trees obliterate it. After ten minutes, Grev relaxes and becomes more comfortable to wear. After a few hours, its wood — dry and cut with a stainless blade — shows through. This is when I enjoy the fragrance most. Grev it keeps its metal-herbal-minty structure right to the end when many fragrances would have collapsed into wood or musk.

Mint is a tricky note for Americans, since we tend to associate it with toothpaste. Grev’s mint is too dry for that, but when I was wearing it, one friend said I smelled like dental medicine.

Despite how assertive Grev is, it’s sheer and not heavy at all. Since it’s an olfactory substitute for air conditioning, I didn’t expect Grev to last long, but it holds its own for a good six hours on my skin. If you’re looking for something cooling yet interesting to wear, and you’re tired of citrus, you might give Grev a try.

This was a short review, so I’ll add a scent-related ghost story. A few nights ago I had dinner in a friend’s backyard. We’d finished eating and were pushed back in our chairs with a curtain of old fir trees scenting the air. One friend’s son chased the dog around the yard. A frog croaked from the pond next door. It was getting dark, and I was about to suggest we go in — or someone lend me a sweater — when my friend’s mom, a graceful woman in her 80s, told us about Stella.

“She wore the loveliest violet perfume,” my friend’s mother said. Stella was one of four girls, including Pearl and Jewel, who were vaudeville performers out of San Francisco, and Ruby. Stella lived most of her life in tiny John Day in rural Eastern Oregon.

When Stella died in 1964, her bottle of violet perfume went to Pearl. Stella’s sisters wanted to smell it and remember Stella, but, try as they might, no one could open the bottle. Then, one day in the early 1970s, Pearl walked into her bedroom and breathed the scent of violets and amber — Stella’s perfume. But the bottle was still sealed. The family still talks about Stella’s visit from the afterlife. 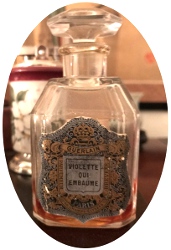 Eventually, my friend’s mom ended up with the perfume. When I found out the bottle was down the hall on a bedroom dresser, I dragged my friend inside to find a yellowed flacon of Guerlain Violette Qui Embaume. Even better, there was still perfume in it, and the stopper lifted easily.

I dabbed some of Stella’s violet perfume on my wrist. It smelled like a simpler L’Heure Bleue, rich in violets tinged with heliotrope, all soaked in guerlinade. And it still smelled wonderful. I imagined Stella visiting her sisters in San Francisco and, in a hat and gloves, buying the bottle at I. Magnin to bring some of the big city home with her.

Slumberhouse Grev is $160 for 30 ml Extrait de Parfum. For information on where to buy it, see Slumberhouse under Perfume Houses. As for Guerlain Violettes Qui Embaume, it was created in 1904 and is long discontinued, left for ghosts.