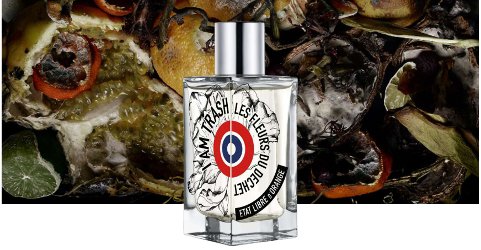 We believe that a new post-religious “jihad” is approaching, coming from an often disillusioned and polluting West, and echoing a new animistic era. Those who have committed crimes against the environment are repenting, and democracies are acknowledging nature as the sacred focal point, meant to be shared. The beliefs of the primitive and ancient tribes are back, and demand our full allegiance. This perfume will carry a universal message: that which is dirty must reflect the beautiful,

“…and wash me clean of the bluish wine stains and the splashes of vomit,

Carrying away both rudder and anchor.” (Arthur Rimbaud, The Drunken Boat.)

Les Fleurs du Déchet represents a passage to the adulthood of Sécrétions Magnifiques. It is a counter-revolution for Etat Libre d’Orange, still noisy and disruptive, but ultimately functional. Givaudan, Ogilvy and Etat Libre d’Orange have created a three-fold company in the service of Mother Nature, to offer her a bouquet of forgiveness and let everyone know – loudly and quickly – that soon it will be too late.

A joint creation between provocative label Etat Libre d’Orange and Ogilvy Paris Agency, I Am Trash Les Fleurs du Déchet perfume is a reflection on the waste that luxury represents. With notes of mouldy fruit and earthworms on a base of apple, juicy citrus, jammy rose and sweet strawberries, the scent leaves a warm, comforting soapy smell lingering on the skin. A perfume as daring, as the concept behind it.

* If you missed it, see the I Am Trash video released earlier this year.