Reading Perfumes: The Guide 20181 has got me revisiting old samples, among them Lubin Upper Ten and Upper Ten for Her, both of which received four stars. Turin writes that Upper Ten has “the cleverest accord I have smelled in a very long time,” and Upper Ten for Her is a “perfume doing the splits.” How could I resist? 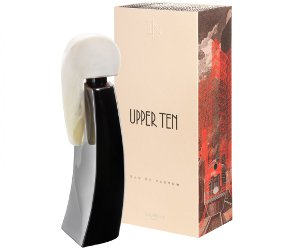 The accord Turin references is juniper, pepper, and aldehydes, and it smells like January in an unheated artist’s studio with canvases drying on the easels. It’s icy and faintly medicinal and sharp with piney paint thinner. Three minutes in, the bracing accord warms and melts into a more conventional blend of wood, leather and vetiver.

The whole experience is like being shaved with a frozen straight-edge razor while sitting on a metallic stool, then led to an old leather club chair near the fire with a velvet throw draped across its back. Upper Ten’s pleasant, opaque body lasts at least half a day but doesn’t quite make it to dinner time. If you’re in the market for a traditional woody masculine-leaning fragrance for the cooler months, Upper Ten is worth sampling.

I’ll spare you a long quote from the fragrance’s PR blurb, except to mention that it references a 1920s flapper slumming in nightclubs and smoking Turkish cigarettes while her Duesenberg warms a spot on the street outside. If you’re thinking the perfume will smell of cigarettes, leather and face powder with a hint of sweat from dancing bodies, think again. The blurb would have been more accurate to tell the story of the flapper’s mother lounging at home on her satin chaise with a box of plump raspberry truffles. Mom has just come from her weekly session with her medium — the same psychic all the ladies in the country club use — and a bit of incense and the scent of herbal potions cling to her dressing gown. (The juxtaposition of sweetness and herbs are the “splits” Turin referenced.) 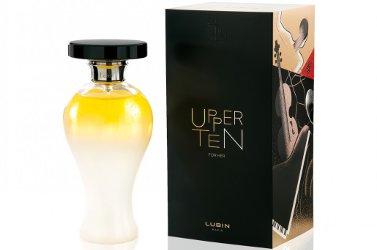 I love a woody fragrance with a hint of fruit in autumn. If DelRae Bois de Paradis didn’t head that list for me right now, Upper Ten for Her would be a contender.