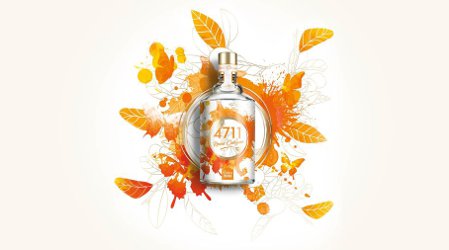 In the mix 2018: Orange
2018 sees the launch of a new range of fragrances: Each of the seven main ingredients of 4711 Original Eau de Cologne will be "remixed" in a limited edition. The first of these is orange, which is given a modern interpretation: from sweet, fruity and tangy through to an aromatic bitterness. A fresh, brave and surprising composition redolent of sunshine, energy and pure joie de vivre. A powerful fragrance statement, which adds an exclamation mark to the summer of 2018.

"The versatile orange in a juicy new remix"
Citrus notes are the most distinctive characteristic of Cologne fragrances. A good reason to begin the first creation of the Remix series with the cheerful exhilaration provided by the scent of oranges. Nicolas Beaulieu, the creative nose behind the 4711 Remix Cologne, describes the development of the fragrant Remix: “My intention was to create a complex Eau de Cologne that shows a sophisticated orientation towards the identity of the 4711 brand but with a surprising twist. The lively orange in combination with a slightly more bitter and aromatic note is seriously addictive. Its full-bodied and intense nature give the fragrance great presence and modernity."