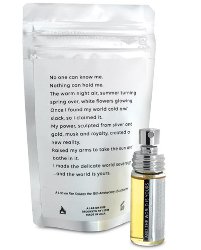 A Lab On Fire has launched And The World Is Yours, a new limited edition fragrance celebrating the 15th anniversary of niche boutique Luckyscent.

Few photographs capture the sumptuousness of celebrity more than the iconic photograph of Faye Dunaway by famed English photographer Terry O’Neill. The starlet sits poolside at the Beverly Hills Hotel at 6 a.m., hungover from winning an Oscar, sanguine in a pale silk robe, newspapers in a moat around her feet declaring her victor. And who better to pay homage to this most Hollywood morning-after, but Dominique Ropion, master of the doe-eyed and disheveled A Lab On Fire classics What We Do In Paris Is Secret and Messy Sexy Just Rolled Out Of Bed?

And the World Is Yours kicks off with a blast of neroli that floods the senses, rich and fresh with the thrilling energy of a papparazzo's flashbulb. With a dramatic sigh, the neroli gives way to a warm, creamy orange blossom, enhanced with a flattering kick of spice. Ropion’s signature vanilla musk plays its part with a powdery puff of heliotrope—apropos for the Hollywood sensuality. And just like the shimmering sunsets of Los Angeles, it melts into a honeyed, musky, golden finish. Like Dunaway in the photograph, And the World Is Yours is stylish, sexy- and still basking in the afterglow of last night's adventures.

A Lab On Fire And The World Is Yours is $30 for 10 ml. The first run has already sold out; sign up at Luckyscent to get on the waiting list for the second run.