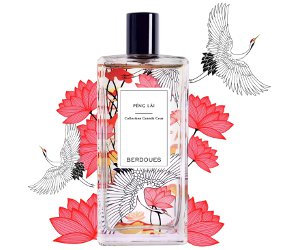 French perfume house Berdoues will launch Péng Lái, a new addition to the Colognes Grand Crus collection. The last in the series was Hoja De Cuba.

This Grand Cru tells the Chinese legend of Péng Lái, the holy mountain where used to live the 8 immortals, one of them was He Xiangu, the goddess of flowers. She is often represented holding a lotus and a peach.

[...]  Our perfumers have put time on hold with fragrant interpretation of the Chinese legend... This Grand Cru invites you to daydream and reveals one of China's most precious flowers, the Osmanthus.

Berdoues Péng Lái will be available in 100 ml.

(via Maison Berdoues at Facebook, additional information via tendance-parfums)