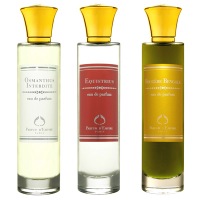 Parfum d'Empire, for those who are not familiar with the line, creates fragrances inspired by historical empires. They've covered quite a bit of ground already, having taken us to Tsarist Russia (Ambre Russe), the Ottoman Empire (Cuir Ottoman) and the Napoleanic Empire (Eau de Gloire), among others. The perfumes are lovely — Ambre Russe particularly so — but none of them have explored themes likely to capture my heart entirely, and so up until now, I've admired the line in an abstract sort of way.

Osmanthus Interdite, on paper, looked like the kind of thing that might finally win me over: it takes the Chinese empire, past and present, as its inspiration, and the fruity floral scent features notes of green tea, citrus, osmanthus, rose, jasmine, musk and leather. Lee over at Perfume Posse told me he would eat his hat (well, strictly speaking, he said he'd eat his hat if he had one) if I didn't like it, and I must apologize (again) for my predictability, but his "hat" is perfectly safe.

Osmanthus Interdite opens on fruity, mildly sweet citrus and just the softest touch of tea. The scent plays up the apricot-ish undertones of the osmanthus, which blends beautifully with the other floral notes in the heart. The leather is as buttery-soft as leather can possibly be while still smelling like leather. As Lee has already pointed out, Osmanthus Interdite has much in common with another China-inspired pairing of tea and osmanthus, Osmanthe Yunnan by Hermès. But Osmanthe Yunnan's sharp opening and smoky-dry finish are absent in Osmanthus Interdite, which is a fuller, rounder, more feminine take on the subject, something like what you'd get if you crossed Osmanthe Yunnan with Ormonde Jayne's Osmanthus. The dry down is simply lovely. I don't know what it is about some osmanthus scents that makes me so happy, but I've long depended on the Ormonde Jayne as a kind of antidote to S.A.D., and Osmanthus Interdite will now join the arsenal — it brings a smile to my face right away.

Along with Osmanthus Interdite, we have two other new entries from Parfum d'Empire: Equistrius and Fougère Bengale. Equistrius is a tribute to both the Roman Empire and a racehorse owned by Marc Antoine Corticchiato, the founder of Parfum d'Empire. It's a lovely blend of powdery iris, musky woods and the slightest little hint of chocolate (nothing like the much sweeter and heavier Iris Ganache from Guerlain). I've said many times that there can't be too many variations on iris, but the recent avalanche of niche iris scents might have me temporarily iris-ed out. I like Equistrius but couldn't get worked up about it, so I'm setting it aside for a few months to see if it grows on me.

Fougère Bengale, meant to evoke India under Queen Victoria, puzzled me — I checked the label and the notes several times to make sure that it wasn't the one inspired by the racehorse. Nope, this is Fougère Bengale and India. But it's all there: the horse, the hay, the barnyard, the manure, even the tobacco drying in the eaves of the barn. It is way cool, and probably the most interesting of the trio, but not something I'd wear. I'm going to send it off to Kevin and see if he can do it justice.

Parfum d'Empire Osmanthus Interdite, Equistrius & Fougère Bengale are in Eau de Parfum, and are $135 each for 100 ml. It goes without saying that the trio ought to be available in a coffret of 15 ml bottles, doesn't it? But no such thing exists. For buying information, see the listing for Parfum d'Empire under Perfume Houses.

Osmanthus: The Scent of Happiness ~ out of the bottle