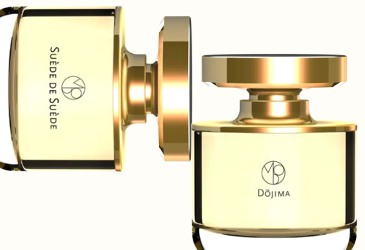 In my mind, Mona di Orio has always been associated with quirky — and sometimes outright challenging — fragrances. Mona di Orio Nuit Noire is as dark and animalic a fragrance as I’ve ever smelled. Even the perfume house’s single note fragrances such as Vanille and Cuir focus on those materials’ less obvious aspects.

This mousse is woody and slightly tangy with cedar, and it sweetens as the fragrance wears on skin. Osmanthus adds a hint of leathery apricot, but Suède de Suède doesn’t feel floral as, say, Lancôme Cuir de Lancôme. Nor is Suède de Suède salty or oily. It’s a tightly focused, creamy suede with enough softness and sweetness to comfort and enough tartness and edge to avoid being cloying.

Suède de Suède has good sillage and lasts about four hours on my skin — not as long as I’d think, given the fragrance’s initial presence. If you love sueded leather, you’ll probably want to smell it, but if you’re satisfied with your bottles of Serge Lutens Daim Blond and Cuir de Lancôme, you might not need to rush to order a sample. If both of those fragrances feel too offbeat to you, Suède de Suède could be the answer.

Dõjima is my favorite of the pair. Its notes include rice powder, jasmine, oris, amber, dry spices, Sichuan pepper, musk, nutmeg, ambrette, clary sage, labdanum and sandalwood. The fragrace is named after the Dōjima Rice Exchange founded by Samurai in 1697 in Osaka, Japan. In the PR materials, a lot is made of Dõjima’s powder (“cloud of rice powder” and “turns to powder”), but don’t think Dõjima smells like baby powder. It’s no dressing table fragrance.

In fact, Dõjima’s initial soft, rich texture makes it Suède de Suède’s sister, in my mind, except that Dõjima smells more like dried grain and grasses through which someone wearing a floral-spicy perfume has walked. The rice — not cooked rice, but the dry, nutty grains — is what the fragrance is all about. Dõjima doesn’t smell “perfumey” to me, but, again like Suède de Suède, comforting.

Where Dõjima really diverges is in its dry down. Unlike Suède de Suède, it doesn’t sweeten, but turns spicier. Instead of hunkering down to a tight, velvety sillage, it lightens and diffuses, and a touch of earthy jasmine shimmers above it. Dõjima lasts about six hours on me and stays close to skin. It’s easy and unobtrusive to wear, but not an “obvious” (read mass-produced-smelling) scent.

Mona di Orio Dõjima and Suède de Suède Eaux de Parfum are $200 for 75 ml. For information on where to purchase them, see Mona di Orio under Perfume Houses.