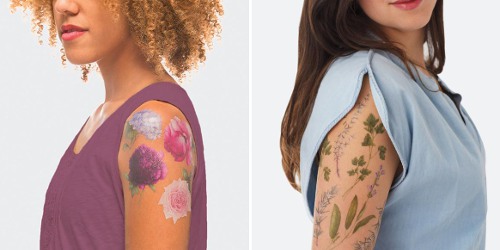 Confession: I don't have any tattoos. When I recently visited an exhibition on the history of tattoos at the New-York Historical Society, I found myself admiring some vintage designs, but I think my moment to get "inked" has passed. When I was a college student, tattoos were still a rarity on my campus, sported only by a few punk rockers and metal heads. When tattoos became popular with mainstream twenty-somethings, I developed a certain level of scorn for the butterflies and "tribal" swirls and Japanese characters everyone suddenly seemed to have on their calves and shoulders and lower backs. And by the time tattooing became legal again in New York and some truly talented tattoo artists were available, I was trying to maintain a serious façade at my then-workplace, for reasons I can no longer remember.

Changing public standards and personal circumstances would now allow me to get a tattoo, if I wanted, but I still don't think I'll take the plunge. The main reason: I wouldn't be able to decide on one image or even several images. I work with art every day, and I live in a pleasurable state of visual satiety. I do enjoy ornamenting myself daily with jewelry, cosmetics and perfume, but those surface delights are all easily changeable. I can become a blank slate and then start over whenever I like.

So, what about temporary tattoos? Until this year, I thought they were all of the gumball-machine variety, very basic in design and fun for kids' birthday parties, but nothing more. Then I started noticing mentions of Tattly in magazines, and once I visited the Tattly website, I was obsessed. Tattly is a Brooklyn-based company that produces temporary tattoos designed by actual artists, with categories ranging from "animals" to "vintage vogue" to — yes — "scented." I've been testing some tattoos from their Bouquet Garni Set and Perennial Set, and even before I smelled them, I was impressed by their look. They're designed by Vincent Jeannerot, who specializes in botanical illustrations, and they're as detailed and finely shaded as actual watercolors. At the same time, once I'd applied them the skin (very easy!) they looked "real" enough to fool a few co-workers (at my current, more open-minded place of employment). 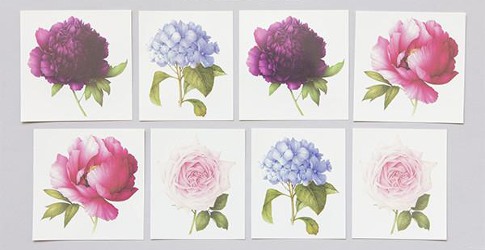 Tattly's Perennial Set includes images of Blue Hydrangea, Pink Peony, Purple Peony and Rose La France, all scented with a fragrance "created in collaboration with Agilex Fragrances," featuring notes of fuchsia, poppy, ylang ylang and poplar wood. On my skin, the fragrance lasts well for one day, and the tattoo lasted for four days (with faded edges on the second day, and further wear and losses after that). The fragrance was stronger than I expected on that first day, and if I'd been wearing more than one tattoo, I might not even have needed to wear actual perfume. To my nose, it's a fruity, musky rose, with some sweet woodiness underneath. It's a perfume-y scent, and I respect Tattly for going in this direction; they could have easily used a watery "fresh" scent that wouldn't match those flowers in full bloom. And have I already mentioned how pretty these designs are?!

On the other hand, if you're not quite up to wearing a big blossom like these (even for a few days), Tattly's Bouquet Garni collection is a little more subtle and unisex in appearance and in fragrance. This set includes Parsley, Sage, Rosemary and Thyme (cue up the Simon and Garfunkel!). These herbal designs are more delicate, all branching stems and tiny leaves (although Sage also includes some purple flowers). They can be applied around wrists and ankles as well as running up arms and legs; I felt a bit druid-like wearing this decorative greenery. 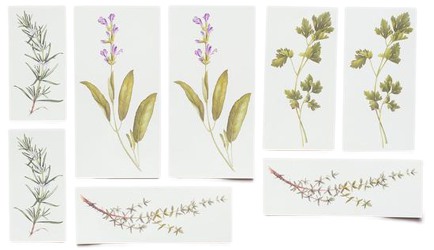 The Bouquet Garni scent (also developed by Agilex) is very different from the Perennial scent: it's an uncanny evocation of a bunch of garden herbs. Its list of notes includes red thyme, bergamot, "sheer white spice accord," parsley, Moroccan rosemary, wild sage, white musk, "clear musk" and white sandalwood. It's a peppery-green scent with an earthy undercurrent that would probably fool me into thinking I was smelling actual herbs if I were blindfolded and you waved it under my nose. Unfortunately, it doesn't last as long as the Perennial fragrance (partially because the herb designs have less surface area?), but it's a summery, natural-smelling pleasure for a couple hours until it dissipates.

Now that I've been inducted into the world of artistic temporary tattoos (and scented ones, no less!) I may be hooked. I'd recommend these treats to someone looking for a whimsical "accessory" for a special occasion or just for a summer outing, or for anyone (like me) who is indecisive or shy of ink-commitment.

And here's a quick poll: If you could have any tattoo, what would it be? Or, if you already have your dream tattoo, and you're comfortable telling us, what is it?

Tattly Bouquet Garni and Perennial scented temporary tattoos are available as sets ($18 for 8 tattoos, 2 of each design). The Blue Hydrangea, Pink Peony, Parsley, Sage, Rosemary, and Thyme tattoos are also available in smaller individual sets ($6 for 2 of the same image), via Tattly.