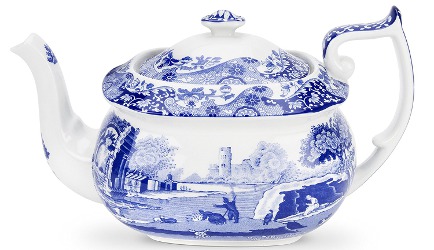 Happy Tuesday, and happy World Heritage Day / International Day for Monuments and Sites! What fragrance are you wearing?

I'm wearing the lovely Acca Kappa Calycanthus. Tea at the moment is Mariage Frères French Breakfast mixed with some random Keemun Hao Ya.

Reminder: on 4/21 we're doing Enchanted April (inspired loosely by the novel and movie of the same name) — wear your favorite Italian fragrance.

Note: the Spode Blue Italian teapot is $69 at Amazon.