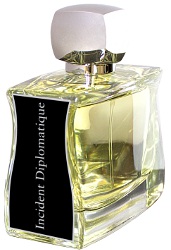 We brush by it, we risk it, without ever thinking about the consequences… Incident Diplomatique clearly possesses its share of superb provocation – bold, owned, and entirely inevitable when desire exudes from our every pore. As unexpected as it is audacious, the fragrance refuses convention and knowingly parades itself. Just as we might give into a staggering impulse too strong to resist, it declares its urges, teasing tension to the breaking point…

Notes for the woody aromatic include mandarin, vetiver and patchouli.