New and upcoming perfume books for 2017: The Art of Flavor: Practices and Principles for Creating Delicious Food by Mandy Aftel and Daniel Patterson, Smothering the Savage and An Imperfect Mimic by Avery Gilbert, Eisenberg Originals: The Golden Years of Fashion, Jewelry, and Fragrance, 1920s-1950s by Sharon Schwartz and Laura Sutton, Scents and Sensibility: Perfume in Victorian Literary Culture by Catherine Maxwell, Le roman des Guerlain by Élisabeth de Feydeau.

The Art of Flavor: Practices and Principles for Creating Delicious Food 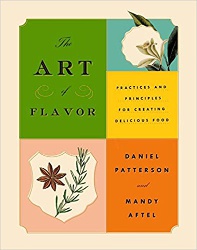 A second book from chef Daniel Patterson and perfumer Mandy Aftel of Aftelier (the first was Aroma: The Magic of Essential Oils in Food & Fragrance.)

Michelin two-star chef Daniel Patterson and celebrated natural perfumer Mandy Aftel are experts at orchestrating ingredients. Yet in a world awash in cooking shows and food blogs, they noticed, home cooks get little guidance in the art of flavor. In this trailblazing guide, they share the secrets to making the most of your ingredients via an indispensable set of tools and principles:

· The Four Rules for creating flavor · A Flavor Compass that points the way to transformative combinations · “Locking,” “burying,” and other aspects of cooking alchemy · The flavor-heightening effects of cooking methods · The Seven Dials that let you fine-tune a dish

With more than eighty recipes that demonstrate each concept and put it into practice, The Art of Flavor is food for the imagination that will help cooks at any level to become flavor virtuosos.

Due for publication in August by Riverhead Books, 256 pages.

Smothering the Savage & An Imperfect Mimic 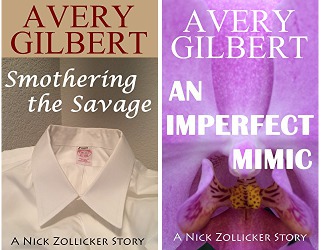 Avery Gilbert, the author of What the Nose Knows: The Science of Scent in Everyday Life, branches out into fiction this month with two stories: Smothering the Savage ("When a winning perfumer goes primitive and puts his company at risk, scent expert Nick Zollicker is called in to sort things out.") and An Imperfect Mimic ("Smell scientist Nick Zollicker falls for a beautiful biologist but she favors a suave French academic. Nick’s attempt to disrupt his rival with a doctored perfume produces unanticipated consequences.") More reading: Going Fictional: Introducing the Nick Zollicker Stories at Gilbert's blog, First Nerve.

25 pages each, .99 cents each for the Kindle editions at Amazon. 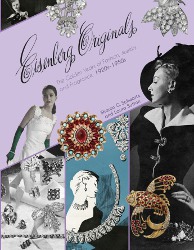 Authors Sharon Schwartz and Laura Sutton "have been involved in the antique, vintage, and collecting worlds for decades."

Eisenberg was one of the first American design houses, and the jewelry that bears its mark is among the finest costume pieces ever created. Yet there is surprisingly little written about the company, and almost nothing about the other products it marketed. In more than 400 photographs, this book chronicles Eisenberg's beginnings in clothing fashion and follows the trajectory of its revered jewelry line, as well as documenting its often overlooked fragrances and cosmetics. With stories of the people and companies that were integral to this label's success, this book shows that, in its golden years, the company's creations deserved the place they held in only the finest stores. 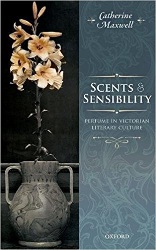 Author Catherine Maxwell is Professor of Victorian Literature at University of London.

This lively, accessible book is the first to explore Victorian literature through scent and perfume, presenting an extensive range of well-known and unfamiliar texts in intriguing and imaginative new ways that make us re-think literature's relation with the senses. Concentrating on aesthetic and decadent authors, Scents and Sensibility introduces a rich selection of poems, essays, and fiction, exploring these texts with reference to both the little-known cultural history of perfume use and the appreciation of natural fragrance in Victorian Britain. It shows how scent and perfume are used to convey not merely moods and atmospheres but the nuances of the aesthete or decadent's carefully cultivated identity, personality, or sensibility.

A key theme is the emergence of the olfactif, the cultivated individual with a refined sense of smell, influentially represented by the poet and critic Algernon Charles Swinburne, who is emulated by a host of canonical and less well-known aesthetic and decadent successors such as Walter Pater, Edmund Gosse, John Addington Symonds, Lafcadio Hearn, Michael Field, Oscar Wilde, Arthur Symons, Mark André Raffalovich, Theodore Wratislaw, and A. Mary F. Robinson. This book explores how scent and perfume pervade the work of these authors in many different ways, signifying such diverse things as style, atmosphere, influence, sexuality, sensibility, spirituality, refinement, individuality, the expression of love and poetic creativity, and the aura of personality, dandyism, modernity, and memory. A coda explores the contrasting twentieth-century responses of Virginia Woolf and Compton Mackenzie to the scent of Victorian literature.

To be published by OUP Oxford in October, 400 pages. 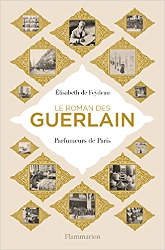 Élisabeth de Feydeau is the author of Diptyque and A Scented Palace: The Secret History of Marie Antoinette’s Perfumer, among others. Here is a (truly bad; my apologies) machine translation of the publisher's description:

"Glory is ephemeral, only fame is lasting." Near two centuries of stories of love and beauty, beaded with so many perfumes imagined, have passed since a day of 1828 Pierre-François-Pascal Guerlain (1798-1864), a perfumer and chemist of his state, opened his first shop in the Rue de Rivoli, not far from the very chic Hotel Meurice in Paris ... His destiny had been sealed many years before, Smells of his early childhood at Abbeville, near his father, a spice merchant and a tin potter. Nutmeg, cinnamon, vanilla and pepper from distant lands had made the child dream and nourished his memory for ever. Desires of independence, the desire, still fleeting, to be realized, pushed on the road a young man ready to do anything to conquer his dreams, And soon to be a visionary creator, endowed with an unrivaled genius to combine happy olfactory alliances. Free and audacious, Guerlain followed his intuition, offering a demanding clientele unforgettable fragrances, enclosed in bottles as well Elegant and refined, as had never been seen before. After him, Aimé, Jacques, Jean-Paul will pursue the adventure by reinventing it incessantly, to the point of embodying the Paris of luxury and voluptuousness. A romantic family success, which the feather of Elizabeth of Feydeau revives with talent. Finally, there is a history where there are many giants and muses, which have inspired many of the great successes of the House.

Published by Flammarian, Softcover, 354 pages, in French. You can read a review in English at Monsieur Guerlain.