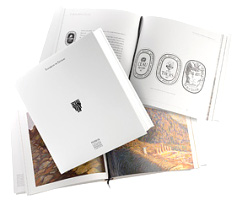 Diptyque (2007), written by perfume author Elisabeth de Feydeau, is perhaps best described as a tribute to three friends who got together by chance, and went on to create a business with a very distinct signature. Although they came from different backgrounds, they shared a passion for art and design, and had the same views on aesthetics and presentation. This beautifully illustrated book traces back the history of Diptyque and its founders, giving an elaborate reconstruction of one of the most remarkable cult brands in perfumery.

Desmond Knox-Leet, Yves Coueslant and Christiane Gautrot opened their first shop in 1961, on the Boulevard Saint-Germain in Paris, where they initially sold plain and printed furnishing fabrics. The former lingerie store at number 34 was located near Place Maubert, and just a few steps away from the Piscine Pontoise, a well-known public swimming pool. That corner of the fifth arrondissement (Left Bank) was still a working-class area in those days, which meant that it was affordable for young entrepeneurs. But it was also a place favored by students, artists and intellectuals: just the kind of cosmopolitan public they were aiming at. Sadly, their avant-garde print designs failed to charm the local clientele. People were more interested in the eclectic collection of ornaments that were used to decorate the windows and interior: potential customers kept asking about the little trifles on display. Soon, Diptyque imported curios from every corner of the world, and commissioned unique products from local artisans, such as candles that matched their own print designs.

Diptyque's first scented candles (Aubépine, Cannelle and Thé) were made by Jean-Claude Bullens in 1963. A graduate of the school of perfumery in Versailles, Bullens was known as one of the best craftsmen in his field; his candles were a huge hit, and eventually he became their exclusive supplier. In '64 Desmond Knox-Leet imported a selection of 'typically British' scented items from his home country: they were little sachets, pot-pourris and pomanders based on English cottage garden fragrances. Again, the Parisian public responded enthusiastically; in reaction to this, Diptyque added barbershop products by Floris, Culpeper, Trumper, and Penhaligon's to their fragrance range.

The next logical step was to introduce a fragrance of their own. Knox-Leet persuaded his business partners to launch a traditional Eau de Toilette. L'Eau (1968) was inspired by a 16th century recipe, and featured notes of cinnamon, rose, clove geranium and sandalwood. It was followed in 1973 by Vinaigre de Toilette, a toilet vinegar used to soften the skin after a bath or a shaving. By the mid-seventies, their fragrances and candles were praised by press and public alike, and a cult brand was born.

The success of Diptyque is the story of three visionary friends, who created products with their own, personal signature: think of Tam Dao and Do Son, both inspired by Yves Coueslant's childhood memories in Indochina. The fact that these products can be attributed to professional perfumers is cleverly omitted: we're told that Knox-Leet was a self-taught perfumer, and that he acted as a creative director for their fragrances:

Until 1993 he was the 'nose' of the firm, mixing and amalgamating powders and essences in his quest for the perfect proportions. He would buy his essences from herbalists in Paris and England, bring back spices from his travels, and harvest flowers and aromatic herbs, pounding his ingredients with a pestle and mortar, steeping and dissolving them in his paint pots, and blending perfumed pastes to his own recipes. These he would then entrust to a perfumer to be transformed into toilet water. (p. 112-114)

In fact, perfumers Serge Kalouguine, Olivia Giacobetti, Daniel Molière, Fabrice Pellegrin and Olivier Pescheux are not mentioned in this book at all. The author's emphasis is clearly on the Diptyque philosophy, not the technical tidbits. All things considered, I'll admit that it doesn't bother me much. The chapter on the gardens created by Knox-Leet and Coueslant in Normandy, and the separate biography on Knox-Leet and his work as a painter give a clear enough impression of what Diptyque really stands for; if you don't mind a little marketing bias, you'll be rewarded with a fascinating story indeed.

The English translation of Diptyque is now available at Aedes or Beautyhabit.