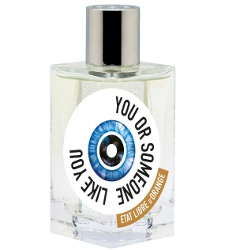 French niche line Etat Libre d’Orange has launched You or Someone Like You, a new fragrance made in collaboration with author Chandler Burr, and named for his first novel.

Los Angeles. In this, the city of fallen angels, fantasy rules.

In On the Road, Jack Kerouac wrote, “LA is the loneliest and most brutal of American cities.” It’s the city described by Woody Allen’s character in Annie Hall as the city where “the only cultural advantage is being able to make a right turn on a red light.”

But they come, the dreamers, for the sunshine and the possibilities, to this land of opportunity, where hope springs eternal. Whatever they’re searching for — happiness, love, money, fame — the temptations lure them deeper and deeper into this concrete paradise.

And you dreamers, with your dreams — you might flourish, you might wither, but you don’t give up. You keep coming, or you think about coming, and sometimes you stay.

Because someday, someone just might be looking for you, pointing at you, wanting you. Or someone like you.

You or Someone Like You was developed by perfumer Caroline Sabas. The notes include rose, mint and herbs.

Etat Libre d’Orange You or Someone Like You is available in 50 or 100 ml.

(via etatlibredorange, additional information via neos1911)