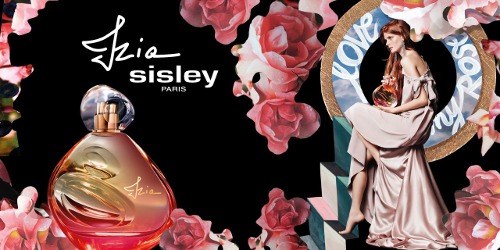 I have no relationship with Sisley, as a (luxury) brand. I've never used the skincare. I used to adore Eau de Campagne, the first fragrance from my BFF perfumer Jean-Claude Ellena, but I always thought it was too expensive for what it was, and while I was worrying over the price, and stopping by a Sisley counter every so often to avail myself of another spray from the tester, they went and reformulated it and I stopped adoring it: problem solved.1 I never cared for Eau du Soir. I liked the Eau de Sisley 1, 2 and 3 they brought out way back in 2009, but I didn't adore them and they were likewise spendy. I know I sprayed Eau Tropicale on a blotter once but I've forgotten what it smelled like.

The latest launch, Izia, attracted my attention right away. The graphics are distinctive and so is the bottle, and if I love the one and hate the other, well, that still works, right? It looks from the advertising (here and here) like they're reaching for a younger audience, or at least, younger than Eau du Soir, and I was curious just how far they would go in that direction.

Izia starts off bright and fun, with an overdose of peppery citrus and jammy fruits, and just enough of a tart / sour undertone to keep it interesting. The aldehydes lend plenty of diffusiveness, and the rose, when it arrives, is already soapy and full. It's not a deep, rich rose, though, in the sense of something like Frédéric Malle Une Rose, and if you look at the list of notes (bergamot, pink pepper, aldehydes, d’Ornano rose accord, transparent floral accord, angelica, cedar, amber accord and musk), you might take special note of the "transparent floral accord". Still, it's quite noticeably a rose fragrance, as in, it smells like roses, and not just a dewy sort of shampoo rose, like Grace Coddington's Grace, or a fruity musk rose, like Annick Goutal Rose Pompon.

The base is a mid-weight, clean-but-not-too-clean ambery woods, with just a little thread of something darker and drier — it smells like maybe there's a touch of cleaned-up patchouli. The lasting power is quite good.

Verdict: With a few exceptions — notably, Hermès Calèche, which I currently own in two vintages — I am not a fan of aldehydic florals, and Izia was no exception.2 I didn't dislike it, but it didn't feel like me, and I wondered, too late, if I should have passed my sample on to Angela or Jessica. It does smell modern, but it isn't what I'd call a casual fragrance, and like most aldehydic florals, it has a kind of gravitas that made me feel under-dressed every time I wore it — that doesn't say "young" to me, although perhaps that makes it a perfect fit with the Sisley brand? The now nearly ancient (2003) Stella by Stella McCartney struck me as more likely to appeal to an actual young person, and I would say the same of the more recent cosmetic-lipstick-powder entry, Valentino Donna.

Whether Izia would appeal to perfumistas is another matter, and I suspect it might appeal to at least some of you. Do comment if you've tried it! And now taking votes: do you love or hate that bottle?

1. I should note that I've been assured more than once by representatives at Sisley counters that "it's never changed", but of course that is ludicrous: it launched in 1974, of course it's changed. Everything that old has changed, usually several times over. Anyway, it's still nice enough but to my nose it is far too fresh and "modern sporty" now, and has lost its original gloriously bitter green edge.