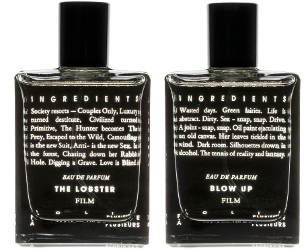 I’m tired of on-trend design. Especially if it’s bossy and difficult to navigate. Extra especially if it reads like an avant garde take on an American Apparel ad. “Get some imagination!” I want to scream. I’m so done with tiny font, nude tweens and vacant looks. Give me emotion, be honest, surprise me.

Plus, this kind of design makes me suspicious. I see a lot of sizzle, and instead of steak, I’m expecting a meat patty too small to make the cut at Barbie and Ken’s barbecue. It’s enough to drive me to comic sans and baskets of kittens.

So, to get to the point, I didn’t last ten seconds at the Folie à Plusieurs website before I jumped ship to Facebook to look for information on the brand. Luckily, I’d already sampled two of the brand’s fragrances, The Lobster and Blow-Up, and I liked them, especially at their reasonable price for a niche line. The bottle’s design is simple but feels fresh. Here’s a case where I’m grateful that branding and product aren’t the same thing.

Folie à Plusieurs’s Facebook page lists the brand’s mission as “Beautiful things are those that madness prompts and reason writes,” and says it was “Inspired by the psychiatric syndrome ‘Folie à Deux’, conceptualized in 19th century French psychiatry by Charles Lasègue and Jean-Pierre Falret in which symptoms of a delusional belief are transmitted from one individual to another. Folie à Plusieurs has taken this condition of ‘shared madness’ as a creative process for the manner in which each scent is realized.”

These are beautiful thoughts. Let’s scrap them and go straight to the actual perfume. The brand’s first line of fragrances is called Le Cinéma Olfactif, and each of the line’s fragrances is inspired by a scene in a movie.

Not surprisingly, The Lobster film, from Greek director Yorgos Lanthimos, inspired The Lobster perfume. Perfumer Mark Buxton developed The Lobster, and its notes include lily of the valley, green notes, woody notes, cedar, cypriol, animalic notes, arnica, moss, myrrh and fenugreek. The Lobster is vivid spring green, plumped with stems so green you can almost taste their tartness. Lily of the valley deepens the fragrance’s “whiff of April” feel, but don’t be so fast to hand this one to your teenaged niece to wear to communion. A thread of skank weaves through the perfume for its first few hours on skin.

Now for something completely different. Blow-Up, directed by Michelangelo Antonioni, inspired Blow-Up. Mark Buxton developed Blow-Up, too, and its notes include wormwood, blackcurrant bud, cardamom, rhubarb, saffron, cypriol, incense, myrrh, amber, birch, cedar, civet, leather, labdanum and cistus. If The Lobster is spring in a forest, Blow-Up is winter in a club situated above a parking garage. After a quick whiff of sweet rhubarb, it’s leathery, animalic, woody and tinged with sweetened motor oil. It's the dense sort of "everything but the kitchen sink" scent that feels warm, comforting and edgy at the same time. As the fragrance fades, it settles into what smells like vanilla and vetiver with a hint of an incense tang.

Both The Lobster and Blow-Up last hours on skin, but I didn’t find that either one wore out its welcome. I’m looking forward to getting to know the other fragrances in the Folie à Plusieurs line, but, please, don’t make me go to the website. I guess I’m just not cool enough.