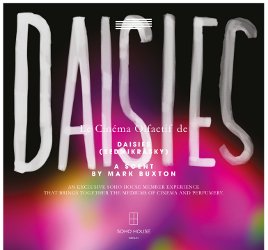 Folie à Plusieurs has launched Daisies, the third entry in their series of fragrances inspired by films being shown at Soho House in Berlin.

The third fragrance in the Le Cinéma Olfactif collection is inspired by two women’s rebellious attacks on wealth and bourgeois culture, and [was] diffused at specific moments during the film screening at Soho House Berlin on October 15th.

I was inspired by the characters’ colorful acts of rebellion; «Daisies» the scent, opens up with an orchestra of green fruity and edible notes that capture the opulence and gluttony of bourgeois culture. Sweets and florals decay in a dramatic and witty twist of wood, leather and opoponax resin in the base. « — Mark Buxton, Perfumer

Folie à Plusieurs Daisies is available in 12 ml Eau de Parfum with ceramic blotter and booklet. Upcoming fragrances / films include a scent for Sofia Coppola's The Virgin Suicides, due for showings in Notting Hill later this week.