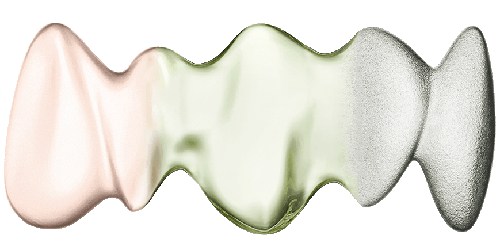 French designer Philippe Starck introduced three fragrances (his first) earlier this year: Peau de Soie, Peau d'Ailleurs and Peau de Pierre. They are "for intelligent people" (oh, that's me, right?) and they represent "the opposite of marketing" (something intelligent perfumistas have perhaps heard once or twice before). The three fragrances vaguely1 align as feminine (Peau de Soie), unisex (Peau d'Ailleurs)2 and masculine (Peau de Pierre) but Starck has made it clear he was not looking for traditional interpretations of masculinity and feminity. On men and Peau de Pierre specifically...

He admitted that in his 67 years, he’s never liked or respected men, and called them “stupid” and “useless.” As a heterosexual man himself, he has a “beautiful wife” and five children. Starck professed that the only other male friends he has are “very feminine.”3

peau de pierre evokes the ambivalent masculinity; it smells like a male perfume but within its core a female mystery. if I had to imagine who would wear it I would say a male acknowledging his female side. with peau de pierre I speak about how men should be. the future is all about women intelligence: ultra-intuitive one. we should acknowledge this and let it be part of ourselves (men).4

It is outside of our remit here to dissect all of that; I bring it up only to say that if you are looking for a conventionally masculine fragrance, Pierre is still your best bet. (If you don't care about gender, do smell all three. I smelled them quickly on blotters and Pierre was the first I wanted to spend time with.5) Perhaps it is true that "it smells like a male perfume but within its core a female mystery", but it is hardly what I'd call unconventional. Some men may not like it, but I'd be surprised if a man thought it too feminine.

The opening calls to mind a mild, lightly sweet shaving cream fougère with accents of citrus and almond, and an aromatic undertone that might or might not be lavender, completely de-clawed. The first scent it evoked was Prada Amber Pour Homme, which by the way, also had within its core a female mystery, if you take that to mean that reportedly many women went ahead and bought a bottle for their own use.

They part ways on the dry down, which in Pierre's case is an airy woody-musk with a vaguely vetiver-ish earthiness and a vague mineral effect. (If you want more dirt and rock, you probably want Terre d'Hermès.) I have not seen notes listed anywhere, but the official description includes an "almost smoky intensity", and that's true if you put the emphasis on the "almost" part more than the "intensity" part. Some of the creaminess (and the "expensive soap" aura) of the opening remains, but the whole thing is transparent enough that you could surely wear it even in very hot weather.

Verdict: I like. I'd love to have the 40 ml, and the 40 ml bottle happens to be cute as a button, but even 40 ml is more than my self-imposed 30 ml limit. I may become a serial sampler, which is pretty much what I've done with Amber Pour Homme. If either scent came in 15 ml, I'd own it.

I will add that I loved the bottles just as much in person as I did when I first saw the images online. That doesn't always happen. And yes, they look fantastic all lined up in a row.

Starck Paris Peau de Pierre Eau de Toilette was developed by perfumer Daphné Bugey. It is $100 for 40 ml (shown below, with Peau de Soie and Peau d'Ailleurs) or $150 for 90 ml (shown just above). A coffret with all three fragrances in 40 ml is $275. 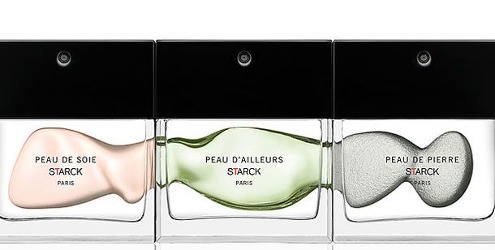 1. Starck talked about gender quite a bit in interviews around the launch, too much for me to repeat in detail here, but he did say that "one theme that has always interested me was gender in all its freedom, its variety and complexity" (see philippe starck interview: 'peau' fragrances collection for starck paris at designboom), and note that in at least one of the campaign's images, it's clear you are not meant to immediately assign a gender to each scent.

2. Generally speaking the fragrance industry hates the word unisex and so you'll usually see one of a number of euphemisms, from genderless to gender-free to "for everyone", and I have not seen Starck refer to Peau d'Ailleurs as unisex. Instead, he called it "asexual" (Ibid.) and for "a new generation — the future who are not a man or a woman" (see philippe starck made a fragrance for non-binary people at i-D).

3. Via Philippe Starck Makes Fragrance Debut With Parfums Starck Paris at Women's Wear Daily (where they still use capital letters).

5. Which is not to say I would not have liked to spend time with the other two, but that I was only able to snag one sample. If you've spent time with Peau de Soie or Peau d'Ailleurs, do comment!