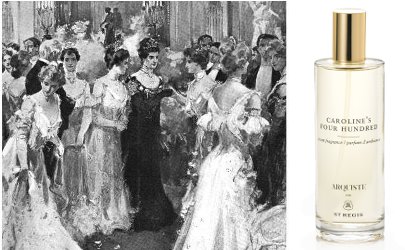 Things come and go in New York City — it's always been that way — but a few of Manhattan's grand old hotels remain. Nowadays they're owned and managed as luxury brands by massive hotel companies, but if you're lucky, you can step into a place like the St. Regis, sit for a moment in an ornately decorated lobby, and imagine yourself back to an earlier time.

The St. Regis Hotel was built in 1904 under the direction of founder John Jacob Astor IV, and it was declared a New York City landmark in 1988. (If you're ever in the neighborhood and you're in the mood for a classic cocktail, I highly recommend a visit to the St. Regis's King Cole Bar.) And now it has its own signature scent, in the form of a room spray and candle developed for Arquiste by perfumer Rodrigo Flores-Roux.

This new St. Regis brand fragrance is called Caroline's Four Hundred, and it's "inspired by the floral arrangements of one of the most splendid balls of the Gilded Age." "Caroline" is Caroline Schermerhorn Astor, mother of John Jacob Astor IV, and "Four Hundred" is a reference to her guest list strategy. Faced with the ever-expanding number of millionaires in Gilded Age New York, she and "society expert" Ward McAllister compiled a directory of the four hundred New Yorkers who (in their opinion) truly mattered in high society. Mrs. Astor's parties were legendary, so there was lots of competition to attend.

Here's a description of the floral arrangements for Mrs. Astor's annual ball of January 29, 1900, direct from the New York Times. The ball was held at her mansion (actually, two connected mansions) on Fifth Avenue, not at the St. Regis itself, but I suppose we have to allow the inspiration and our imagination to drift a few blocks down the street:

Mrs. Astor received alone in the great drawing room of the north, or upper house, which was filled with vases of American Beauty roses. Along the sides of the hall were branches of flowering almonds, apple and quince blossoms, while about pillars of the halls were banked palms, pink and white azaleas in pots, and 'Jack' roses. Other flowers used were white lilies, yellow jonquils, & c. . . .There was a cotillion, danced in the ballroom. . . .The decorations there, as in all the apartments, were extremely simple and consisted of Mrs. Astor's favorite flower, the American Beauty rose, Easter Lilies, and carnations, while here and there were potted palms. . . .The decorations of the tables were flat centrepieces, with bowls of orchids and violets at alternate tables. The decorations of the buffet tables were of American Beauty roses.1

Arquiste Caroline's Four Hundred reportedly includes all these floral notes in its composition — the list is drawn straight from that account, with the exception of the azaleas. (Poor azaleas.) I can't pick out most of these individual notes, but the overall effect is right: it's a profusion of hothouse flowers, just delivered from the florist, cool and fresh and just a little artificial-smelling. The rose is definitely there at the center, and it's complemented by fruity notes of apple and melon with some dewy green leaves. When I spritz Caroline's Four Hundred on paper, rather than into the air, I'm able to pick up more of its nuances, including a silky lily note under the rose.

Caroline's Four Hundred is a very feminine fragrance by present-day standards (and it would probably sell well in perfume form). For a room fragrance, I usually prefer something a little deeper and earthier; actually, I'm tempted to spray this scent around the room while I'm burning a candle with notes of wood and leather and cigar smoke (any suggestions?), in order to evoke the full smell-spectrum of a turn-of-the-century ball with four hundred guests. Maybe Arquiste could be convinced to issue a companion fragrance. In any case, I bet Mrs. Astor (even in 2016, I don't dare call her "Caroline") would be pleased.

1. New York Times, January 29, 1900. You can also view a transcript of the article here. The menu and the descriptions of the guests' outfits are worth a read.

Note: top left image is Caroline Schermerhorn Astor and her guest at one of her lavish balls, New York 1902 [cropped] via Wikimedia Commons.