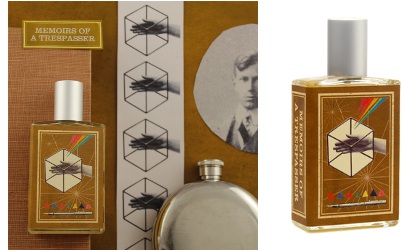 The early exploration writing of Philip Sava bent the limits of post-modern fiction, revealing fantastical worlds that fooled many into believing they were, in fact, real. Sava’s kaleidoscopic collections, of which Memoirs of a Trespasser is the undeniable centerpiece, drew upon true experiences from his exotic travels but were infused with a hallucinatory inventiveness that set his work apart from others in the genre.

Though Sava had associates all over the world, he spent most of his time living in solitude on a ranch in southern Madagascar. When interrogated by the press on his cloistered lifestyle he notoriously answered, “Who needs love when you have cognac?”

When I reviewed two fragrances (An Air of Despair and A City On Fire) from indie niche line Imaginary Authors back in June, I asked people to name their own favorites from the brand in the comments. Memoirs of a Trespasser garnered the most mentions, and now that I've smelled it, I can see why.

As with the other fragrances from Imaginary Authors, the back story is essentially an imaginary blurb from an imaginary book written by an imaginary author (in this case, Philip Sava; see above). And it's a reasonably good one, but like many book blurbs, somewhat misleading. If you're wanting to bend the limits of post-modern anything, or reveal fantastical worlds and so on and so forth, you might be better served by the offbeat A City On Fire, or the even more offbeat (and demanding) Bull's Blood. Memoirs of a Trespasser is more easy-going than either: it's a just-slightly-offbeat vanilla comfort scent for grown ups, and perhaps more reflective of the emphasis on creature comforts found in the line about cognac.

The opening is, admittedly, awfully sweet and fruity, and closer to overindulgence at a fairground than any sort of exotic travels. For a few unhappy seconds I was dismayed that I'd blithely put three sprays on my arm instead of one judicious spritz on a blotter — when will I ever learn? Memoirs calms quickly enough, though, and then it's a reasonably dry and smooth vanilla over a bed of resinous amber-y woods, with hints of spice and allusions to tobacco and leather. It's oak-y but not overtly boozy, and there's a little thread of smoke running through the base. It isn't creamy,1 or cake-like, or even foody, and it's more sheer than the notes (vanilla, guaiacwood, myrrh, benzoin, ambrette and oak barrels) might suggest, lying somewhere in the middle of the continuum between Diptyque Eau Duelle and Tom Ford Tobacco Vanille. It has reasonable heft and sillage, though, and the lasting power is quite good.

Verdict: A winner, and I'm glad I procrastinated and did not try it in really hot and humid weather. If it came in a travel size, it would go on my buy list (regular readers might remember that I am determined not to buy more than 30 ml of anything, given that I already own more perfume than I'll use in my lifetime). Memoirs, along with Yesterday's Haze (nutty creamy fig) and Cape Heartache (strawberry and pine), would make a perfect quirky-but-wearable indie fall / winter trio.

1. Although I should note that I'd totally forgotten that Kevin included Memoirs in his Top 10 Winter Fragrances of 2014. He says it is creamy, so your mileage may vary. He also says "This is how I wish my sweaters smelled when taken out in autumn after summer storage", and I'll second that.