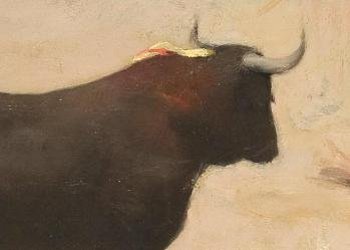 Here's the blurb about Bull's Blood* by indie perfume house Imaginary Authors (yes, the "authors" are from the world of make-believe, no need to google them or search on Amazon for their works!):

Devante Valéreo was raised in a dusty Spanish village on the Balearic Sea. He fondly recalled going to the bullfights with his father, an ex-picador, and credited those early experiences with inspiring his most popular novella, Bull’s Blood. The book’s lurid tale of seduction garnered obscenity charges against the author. Though the charges were rejected by the court, a ban on the sale of his works persisted for a number of years.

A fixture in Barcelona, smoking cigarillos and writing in the cafés and bars into the night, Valéreo disappeared as a fugitive in 1967 after a highly publicized bar scuffle with American sailors, one of whom later died from his injuries. 'A man who has killed,' he wrote in Bull’s Blood, 'is a man who knows passion.'

Really? I'm pretty sure I know passion, and I've never killed anyone — yet (Valéreo, I assume, "wrote" pulp fiction). And the bullfighting connection with Bull's Blood? I could do without it. I spent weeks traveling through Spain hearing an almost non-stop debate between a friend who thought bullfighting was barbaric and our guide who loved it ("Glorious bulls will disappear if we stop breeding for bullfighting!")  In the midst of one of these on-the-road arguments, we stopped for refreshments. The market-bar was next to a field, and a huge bull took notice as I sipped my lemonade and stared in his direction; he slowly walked towards me, not getting too close. It was one of the most exciting moments of my trip. This bull inserted a living face and body into the debate I was hearing (he was glorious and I could not imagine killing him for "sport"); I wondered if he was destined for the bullfighting ring or if he was safely "retired."

I've never attended a bullfight. If a bullfight is really a fair battle between man and beast, I wonder why matadors never get killed or maimed as often as the bulls — and horses — involved in the spectacle. In the rigged bullfight (DO read how bulls are prepped for fighting, days in advance), men "triumph"...bulls die. Since Robin here at Now Smell This allows me one controversial topic a year, I'll simply say that when I think of the glories of Spain, bullfighting does not make the cut; give me Velázquez, Don Quixote, olives, Goya, Seville Cathedral, sherry, Joaquín Rodrigo, Victoria de los Ángeles, flamenco, Carmen Maura, Lorca...even Picasso (though he was a big fan of bullfighting). 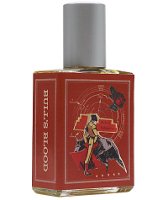 Bull's Blood, the perfume, smells good (and interesting). It goes on smoky-floral, with sweet resin-y notes blending with a dark rose scent. Bull's Blood smells rather "dressy" and formal at first, but as it begins to develop, I detect hints of sweat, sweaty scalp to be precise, and a slightly fecal musk seeping through the sweet resins and flowers. Bull's Blood never turns completely dirty but it does get rough in the base: I smell patchouli, residual rose and maybe some tobacco smoke combined with an "oily" (petrol-like/exhaust-fume) leather note (decidedly unclean). In the extreme dry down, patchouli and rose return, joined by a wood note and leather (now softer). Bull's Blood has good lasting power and sillage; if you dislike dirty fragrances, give it a pass. I blended two parts Bull's Blood with six parts rose Eau de Cologne and the result smelled great, even pretty.

There's nothing pretty about the prelude, "fugue" or aftermath of a bullfight...or bull's blood; to me, a bullfight is a sordid affair. But who am I to judge? I'd be perfectly happy if Bull's Blood were called "Matador's Blood" — I'd cheer the bull's victory (and hope, against hope?, he'd be allowed to live to "enjoy" it).

Note: top image is detail from Bulls (Dead Horses) by Ramon Casas i Carbó [cropped and altered], via Wikimedia Commons.