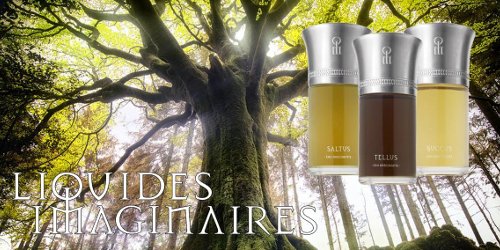 Saltus ~ "The spirit of sap Scents emanating from inside the tree, just under its bark, from its resinous and camphorated vegetal nectar which ensures its growth. An intense perfume that sweeps us along by the momentum of its organic energy. Its spirit: the bubbling vigour of life, the will to live, to jump up, rise, the vital energy of the ambition to grow." With notes of cedar leaves, eucalyptus, camphor, storax, milk, patchouli, frankincense, tonka bean, castoreum and sandalwood.

Tellus ~ "The spirit of the earth Nose in the soil, buried in the undergrowth, stirring smells of roots and fungus. Damp soil scented with wilted flowers, burrowing animals and changing seasons. Planted deep within Mother Earth, the tree draws its strength from the nutrient-providing decaying matter of humus. Its spirit: a deep spirit, with strong, solid roots, the telluric force without which nothing grows." With earth, patchouli, cashmeran, lily, costus, moss, ambroxan, fir balsam and labdanum.

Succus ~ "The spirit of the treetop The airy and solar scent of the treetops, the seduction of its living and radiating flowers ensuring its reproduction. From this canopy, its perfume is unfurled and spreads sensually in the hot wind. Its spirit: the spirit of the border between the material and immaterial worlds, between leaf and air, freedom and dream, desire and exterior beauty." With tangerine, grapefruit, bay laurel, rosemary, juniper, cedar leaves, clary sage, ginger, black pepper, orchid, vetiver, cedarwood, woods, frankincense and musk.