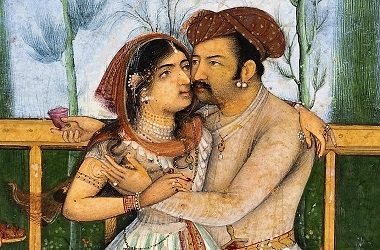 Day after day, he worked to perfect the love potion to seduce this untouchable woman. He asked her to meet him early in the morning in the park where the cherry blossoms were in full bloom. The perfect moment to kiss her would be apparent. Later, he understood that she never drank the filter he prepared. Instead, it was destiny that brought them together.

The Atelier Cologne Philtre Ceylan copywriter apparently does not know what "untouchable" can mean in Ceylon (Sri Lanka). Filter? No, that would be — p-h-i-l-t-r-e. ARE there cherry trees in Sri Lanka? Why not a heavily scented flowering myristica fragrans tree (that yields nutmeg and mace)? Perhaps all was lost in translation? (But when a perfume costs over $300, it is nice to get some free humor.)

Philtre Ceylan (roughly translated as Ceylon love potion) is part of the Collection Orient. Philtre Ceylan's mix of notes1 promised an exciting perfume experience; it opens with the scents of strong black tea infused with citrus and spearmint. What happens next is surprising and interesting: a competition between great tea notes and cumin; it's as if the cologne were breathing on your skin, one exhale smells of tea, the next of cumin...back and forth...on and on. And cumin and tea are a great combo.

Have you heard someone say they wish they could bottle the sweat of a person whose body aroma turns them on? Philtre Ceylan is a pretty close approximation to bottled sweat. Cumin lovers, those who champion grungy cedar, perspiring grapefruit, crotch-et-y tobacco, urinous honey, oily scalp costus roots or bad-breath black pepper: run to Philtre Ceylan for more body scent! Those two lovers mentioned in the PR for Philtre Ceylan? They're certainly all hot and bothered and surely develop pit stains as they kiss, embrace, etc. (lots of sweet black tea adds to their agitation!)

Do you think I hate Philtre Ceylan? Not at all! I love "robust" fragrances. Several scenarios came to my mind while wearing a good dose of Philtre Ceylan on my skin: 1. I had forgotten to wear deodorant on a super- hot and humid day; 2. I tried to cover up my sweat with tea-scented perfume; or 3. I was wearing a shirt that needed laundering. Still, I enjoyed wearing Philtre Ceylan...even as I was (a bit) wary about the impression I was having on those near me. (One woman at work wrinkled her nose when I came to her desk but I could see from her expression she immediately thought better of saying anything to me: "Is it Kevin's perfume...or...?" 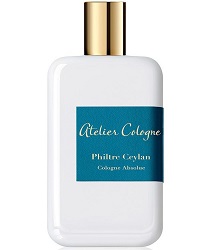 The only durable notes besides tea and cumin that catch my attention in Philtre Ceylan are dry papyrus (almost smoky) and an "overall aroma" that reminds me of my FAMOUS (just ask Robin here at NST!) lime pickle preserve (which contains quite a few Indian spices and mustard oil). If you love spice and tea (and perfume-y B.O.), give Philtre Ceylan a sniff; it has great projection and, for an Atelier Cologne fragrance, good (half-day) tenacity.

I won't be buying Philtre Ceylan for two reasons: its crazy price and the fact I own, and wear often, the more complex Eau d'Hermès and Serge Lutens Muscs Koublaï Khan (I just re-read my review of that scent from 2007 and laughed: "Will Muscs Koublaï Khan be joining my other 'bad boys' of perfume? I appreciate Muscs Koublaï Khan as I appreciate characters who are independent and fearless, who don’t give a damn what others think of them, their ideas, their hairstyle, their clothes or — their smell. I don’t believe I’ve evolved to that level of personal freedom … yet." (Insert maniacal laughter: HAHAHAHAHAHAHAHAHAHAHAHA! I have most certainly evolved since 2007.)

Atelier Cologne Philtre Ceylan (Cologne Absolue concentrated at 20%) is $325 for 200 ml and $250 for 100 ml (as of today, I see no 30 ml option for separate purchase); for buying information see the listing for Atelier Cologne under Perfume Houses.

Note: top image is detail from Govardhan. Dalliance on a Terrace via Wikimedia Commons.