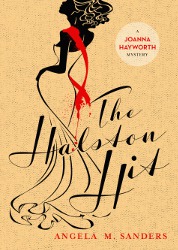 Headed to the beach? Can't handle any more political jabber? Need something to read in the bathtub? The Halston Hit, by NST's Angela, may be the answer. It's $3.99 on Kindle, Nook, Kobo, and iBooks. (Paperback to follow.)

Hemmed in by danger

As vintage clothing store owner Joanna Hayworth blissfully awaits her wedding a week away, her only challenge is to find the right dress. Then she discovers a dead drag queen among the sequined gowns and frothy wigs of the Fille Fantastique pageant. She does her best to help the police maneuver the social minefield of the drag world, until the dead queen’s “ghost” reappears, accusing her of the murder.

To clear her name, Joanna must investigate the strangely impassive family running a funeral home; a rival drag queen who’s gone AWOL; the obsessive proprietor of the queen’s favorite watering hole; and the mole-like man who lives in the cabaret’s basement. If Joanna’s not careful, her wedding will turn out to be a funeral.