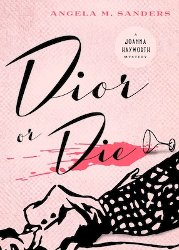 Dior or Die, the sequel to The Lanvin Murders,1 is out! It's on Kindle for $3.99 and will be available in paperback for $13.95 in about three weeks. If you need something to peruse in the bathtub — a novel that won't sprain any brain cells — you might want to give Dior or Die a try.

Here's an excerpt, so you can see if Dior or Die is your thing. (Note: the "tiki bar" refers to an old bar the heroine, Joanna Hayworth, uses as her cashier's table in her vintage clothing store. "Vivienne's clothes" are three trunks of vintage haute couture Joanna won at an auction, but which were seized when Vivienne was found poisoned to death that night. You should be able to figure out the rest.) This is from Chapter Fourteen:

That night, hours after the store closed, Joanna leaned over the tiki bar to tally receipts. The student had come back for the lemon chiffon prom dress, but otherwise the day's sales were pathetic. Joanna moved to her bills. The web designer had agreed to take trade, but she faced the rent, a stack of dry cleaning invoices, and a shockingly large plumbing bill. Honestly, plumbers must earn more than plastic surgeons. She'd managed to put off the landlord until after the NAP auction, but he'd made it clear she wouldn't have a day longer. To make things worse, the first payment on her line of credit was coming due.

The store was dark but for a small pool of light from the Marie Antoinette-shaped lamp on the tiki bar. There was no way around it. Unless she got her hands on Vivienne's clothes, and fast, she couldn't make ends meet.

What was she going to do? Joanna shoved the bills to the side. She could ask Paul for a loan. He wasn't rich, but he said he had a few jobs in the offing. Warmth spread over her at the thought of him. Too bad he wasn’t there right now, relaxing in the armchair by the dressing rooms. She glanced toward the chair at the darkened rear of the store, imagining his hands turning the page of a Raymond Chandler novel. But she wouldn’t ask him for money. Especially if it originally came from Eve.

A faint sound, like a pebble hitting tile, tapped from behind her. The skin on Joanna's neck prickled. She rose from the stool and eased the bathroom door open. Night showed through the window to the alley. It must have been something out back—maybe a cat. She boosted the window open and glimpsed someone relieving himself behind the Dumpster down the block. She shut and locked the window and shook her head. Nerves.

She returned to the tiki bar and bundled the receipts to take home. To help pay bills she could get a roommate, but that thought galled. What if the roommate wanted to hang some mall crap in the living room or put in a microwave? Forget it. Of course, Paul could move in and share the mortgage. She shook her head. Not that it mattered, since by then her bills would be long past due.

A movement in the front window caught the corner of her eye. White skin and dark eyes, looking in. It was only there for a moment before ducking away. Adrenalin surged through her body. Calm down, Joanna willed herself. People pass by the window all the time. It's a busy street. Still, she couldn't shake the feeling that someone was watching her.

Nonsense, she thought. Everything that's been happening lately is getting to me, that's all. I'm going home. She piled the bills in her purse and clicked off the lamp.

At this hour? As Joanna watched the phone, her uneasiness grew. The phone continued to ring three then four times, when the answering machine would pick it up. The machine clicked on to a dial tone. Joanna let out her breath. The caller probably just wanted to find out the store's hours and wasn't patient enough to wait through her message.

The phone rang again. The hairs on her arm stood up. This is ridiculous, she thought. Why are you afraid of the phone? She turned on the lamp again. At the third ring she grabbed the receiver. "Hello?"

She sucked in her breath. "Who is this?"

Her blood turned to ice. "No, I'm not. I have—have people here."

"I see you." The whisper’s rasp removed any indication of whether the caller was a man or woman. "There's no one with you."

Her heart pounded. With the single light in the store, she'd be a clear target to anyone looking in. She glanced at the front window, but only the silhouettes of late night diners in the restaurant across the street moved. Too far away to hear her scream. Still clutching the phone, she sank to the floor behind the counter, out of view, and yanked the lamp's plug from the wall. "What do you want?" she asked.

"You can't hide from me, Joanna. I'll always find you. Stay out of business that doesn't concern you."

"What do you mean?" Her voice shook. Then, in a firmer tone, she said, "This is a hoax. Some kind of joke."

The raspy laughter was freakish. "Look in the dressing room. And don't say I didn't warn you." The phone call ended abruptly.
A cold sweat broke over Joanna's neck and forehead as she replaced the receiver. She sat still, hearing only the occasional car on the street. A minute passed, then two. I can't stay here forever, she thought. I have to get up, turn on a light. I have to go home.

Look in the dressing room, the voice had said.

Lights still off, Joanna felt around the tiki bar's lower shelf until she found a broken hat pin. As a weapon, it wasn't much, but it was all she had. Taking a deep breath, she crept from the protected area behind the counter and tiki bar. Cold Dupioni silk brushed her face as she passed a rack of dresses. Behind the zebra-striped chair, she paused again and listened. Silence. She leaned forward for a clear view of the front window. No one.

The curtains encircling both dressing rooms were closed. Who had been in the dressing rooms last? Apple had closed shop today. She would have cleaned them both out before she left. They should be empty.

Shaking, Joanna stood and jerked open the curtains of the first dressing room. Nothing. All she saw were the small, velvet-topped bench and gold-framed mirror usually there. That left the other dressing room.

She glanced again at the darkened window, then focused on the dressing room's silk curtains. God, she wished someone were with her. She bit her lip and counted silently. One, two, three—she drew aside the curtain and instantly let it fall closed again. She clicked on the store's overhead lights then ripped aside the dressing room curtains. Hanging from a hook was a shredded silk nightgown, its top bunched like a head. It dangled from a tiny silken noose.

1. Portland readers: Powell's carries The Lanvin Murders at all its stores, but it's been selling out pretty quickly. You can find it at the library, though, and online.