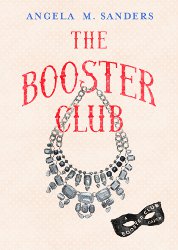 In the first of what I hope will be a long-running series, Angela Sanders has resurrected the art of the comic caper, and done so brilliantly. Quirky characters, lots of action, and hairpin plot turns make The Booster Club a must-read and pure gold entertainment.  — PJ Alderman, New York Times and USA Today bestselling author of Haunting Jordan, a Port Chatham Cozy Mystery

When it comes to good deeds, the Booster Club proves that crime pays.

Claudine is a fourth generation cat burglar preparing to heist the famous Cabrini jewels when she’s drawn into finding a home for four children whose mother died in jail. She joins forces with Ruby — an outspoken hairdresser with a sideline of shoplifting — and Deborah, who can steal the watch off your wrist, but only as her alter ego, Sabine. Together, they’re the Booster Club.

The women set about buying the abandoned firehouse where the children have been living, only to discover that a ruthless developer wants the land. With the help of Claudine’s father and a retirement home for petty criminals, they must concoct a scheme clever enough to outwit the developer, the uppity Women’s League, and at least one shady politician. Who are the crooks now?

The Booster Club is the first in a new series of capers by the author of the Joanna Hayworth Vintage Clothing mysteries. If you like your crime writing quirky and heartwarming, you’ll love The Booster Club.

$3.99 at Amazon, iBooks, Nook and Kobo. Paperback to follow. More about Angela's writing is at her website.