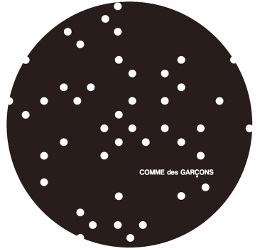 Dot is the latest fragrance release from Comme des Garçons. It comes in the melted light bulb bottle,1 which I did not like in clear glass, but which looks great fun in opaque black with polka dots (see below). Also in its favor, in my book at least, it's supposed to be about osmanthus, one of my (yes, many) favorite floral notes: "The aim was not only to capture the smell of the flower but to reproduce the mysterious allure that penetrates the air of a park filled with Osmantus trees in bloom."2

Throw in a few berries, and Dot pretty much follows its lists of notes: bitter orange, leafy green accord, pepper, osmanthus, olibanum and white amber woods. It's juicy and berried / fruity for a few seconds, then it's terribly peppery but only for a brief time. Then there's sheer florals, a bit green but only vaguely osmanthus-y. While Dot has a definite fruity undertone, there's none of the rich apricot jam (or indeed, any richness at all) that you might hope to find in an osmanthus fragrance. There's light incense — for about 20 minutes mid-development, the incense is the strongest note, and that was my favorite part — and a pale woody amber-ish dry down. If you'd asked me to smell it blind and guess what it was meant to be, in a million years I would not have said osmanthus, or indeed any particular flower at all. It just smells like a light summery floral, mostly clean, entirely innocuous. 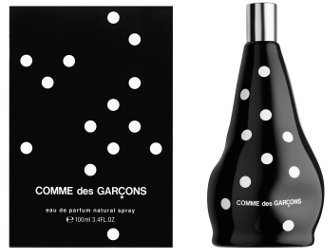 Verdict: I said above that I wouldn't have guessed osmanthus, and I wouldn't have guessed Comme des Garçons either. The name Dot, I presume, comes from the many polka-dotted items, from shoes to wallets to shirts, in the brand's Play diffusion line. In stark contrast to the avant-garde fashions of Rei Kawakubo, most of the "casual basic" Play items look indistinguishable from the old-style preppy clothing from The Gap et al., and can be identified as Comme des Garçons only by the red heart face Play logo (or, sometimes, the red-heart polka dots). Dot, the perfume, works in something of the same way. It's been some time since Comme des Garçons was widely perceived as an avant-garde perfume house, but still, Dot might be the most "accessible" / "casual basic" fragrance they've done yet,3 and if it were not for the incense, there would be nothing to distinguish Dot from any of the billionty other inoffensive light floral fragrances on the market. It's harder, I think, to signal irony in perfume than it is in fashion.

Still, Dot is pleasant and easy to wear, and it's well done.4 It joins the ever-swelling population of fragrances that I would probably wear if a bottle fell in my lap, but even then I am not sure I'd reach for all that frequently.

The quick poll: name 3 Comme des Garçons fragrances that you think anyone new to the brand should try.

1. Comme des Garçons described it as a "rejected bottle".

2. Via Liberty of London.

3. You could also make an argument for 2009's Dover Street Market. That one skewed a little masculine, this one skews a little feminine.

4. This is where I make a guilty admission that I only wore Dot for two days before writing this review. Three is usually my minimum, and I'm happier with four or five. But I decided Dot was not going to reveal anything new on further wear, plus, Kevin could not get his review done for today. I promise I will wear it again this coming weekend and come back here to eat my words if it all comes out glorious in the end.