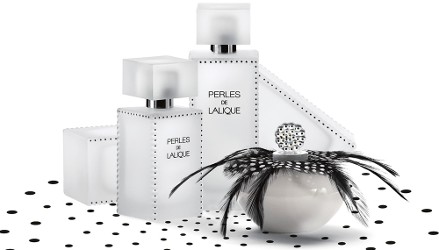 Last weekend brought a near-record-breaking snowstorm to my little corner of the world, and when mass transit shut down and a temporary travel ban was put in place, I had no choice but to spend a cozy weekend indoors. It was the perfect occasion to spritz on clouds of Lorenzo Villori Teint de Neige or Serge Lutens Rahät Loukoum for fluffy comfort while I curled up to read and write.

Monday arrived right on schedule, however, and the roads had been cleared sufficiently and I had no excuse to hibernate any longer. I had to shrug off my winter-cocoon perfumes and spray on something that would help me to put on my work-clothes, make my commute, and tackle my to-do list. I ended up reaching for an old favorite that I've somehow never reviewed before: Perles de Lalique.

When Perles de Lalique was released in 2006 (a decade ago!), it was promoted as a contemporary take on chypre fragrances, promising sophistication without some of the heavier classical trappings of the genre. It was developed by perfumer Nathalie Lorson, with a composition of Bulgarian rose, orris, Bourbon pepper, patchouli and cashmere woods, and its frosted bottle with black "pearl" borders was inspired by a vintage Lalique vanity set.

Wearing Perles this week, I remembered how much I love it. It still feels like a thoughtful, high-quality fragrance, unlike many later entries in the "contemporary chypre" category. It's a spicy, woody rose, and it opens with an emphatic kick of black pepper: you don't actually have to be a rose-lover to wear this fragrance, but you'd better like pepper quite a bit. The patchouli is more like real patchouli than anything I've smelled in recent releases, and there's an unexpected dose of cedar too.

If I spray on Perles de Lalique just before I put on my coat and leave the house, the pepper and cedar propel me through my commute — with generous sillage! By the time I arrive at the office, the woods have smoothed out and turned softly musky; the rose is dark and subtle. The dry down of Perles wears closer to the skin and feels "classy" but not dramatic; it also happens to skew more androgynous than many of my go-to fragrances. When spring comes, I'll bounce right back to my usual bright, honeyed roses and sheer violets, but for now I'm enjoying a productive mid-winter "reunion" with Perles de Lalique.

Lalique Perles de Lalique is available as 50 ml ($100) and 100 ml ($135) Eau de Parfum via the Lalique website. It can also be found for considerably less on several discount sites. A pure perfume concentration is also available ($600, in a very fancy bottle); let us know if you've ever tried it!