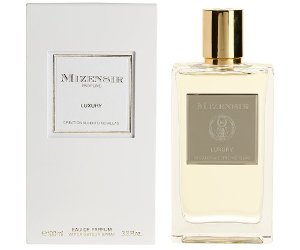 Luxury (shown) ~ "Perfume of the powder, the scents of make-up and creams... A woman gets ready whereas a man observes it. This man, it is Alberto Morillas, perfumer who puts his look with its art: of this moment, he creates Luxury, a pure concentrated of femininity. The most precious ingredients come to sublimate the natural smell of the skin as a suspicion of blusher raises the pink of a cheekbone. That feels the make-up, the captivating balms, the soft milk in the flowery notes. There is of the orange blossom, a beautiful iris to which Alberto Morillas added the irone, this naturally present molecule in the rhizome and which gives him powder signature." Additional notes include  bergamot, ambrox, benzoin, vanilla, tonka bean and white musk.

Ideal Oud ~ "Dialogue between the oud and the rose. Look of a perfumer on two raw materials that everything brings into conflict, the strength and the delicacy, the shadow and the light. To tame this oud so powerful, so complex, Alberto Morillas married him to a duet of roses, Bulgarian and centifolia. The pure oud of Laos then takes on an air of dark, mysterious flower, been of a point of spice by the pink pepper and the saffron. All the so mesmerizing and cuiré-wooded character is, intact, raised by the wood of papyrus and the labdanum there. It is an oud for woman who shows himself so sublime on a man. Nothing heady or of animal, a perfume beautiful as a silk satin caressing the skin." Additional notes include ylang ylang and vanilla.

Perfect Oud ~ "Freeze frame. Warmed by embers, pieces of oud waste away. Metamorphosis of an extraordinary wood which, in fine smoke, takes then all its dimension. An image for a vision, creator's bias because Alberto Morillas chose not to integrate join natural essence of the famous wood: Perfect Oud is an impression, a " olfactive memory ", when there is only an emotion in the memory. The heat which rises when embers turn(shoot) in the carmine, a scent intensely smoked and cuirée which gets free. The fine volutes perfume then the body, the materials and the skin. For this scene, the cedar of Alaska has the role title." Additional notes include bergamot, coriander, rose, iris, oud accord and cade.

Bois de Mysore ~ "No perfumer had arrested the sandalwood like this. The tree in its entirety, of the top up to roots. And not as he is the custom, ingredient signing the compositions by his captivating and woody nuances. Here, it is the green of the leaf, its freshness and its sweetness that Alberto Morillas evokes by cardamom green and the leaf of violet. It is also the heart of the wood, the trunk of the tree with a sandalwood of Sri Lanka, creamy and dense. And plunged into the earth, the roots, via white musk very particular as the vulcanolide. Mineral, earthy, he gets involved in the sandalwood to reveal a hardly powdered, carnal sensualism as the deer. A luxurious wood of skin." Additional notes include mandarin, neroli, jasmine and white musk.