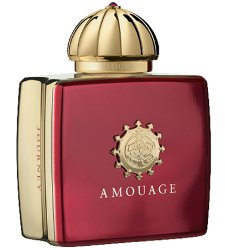 So often with Amouage, I feel like Opposite Woman. Most perfume critics laud Fate Woman as a masterpiece, but I found it a cloying powder bomb. Tons of perfumistas cherish Memoir Woman, but it’s a train wreck on my skin. Now, Journey Woman. I’ve read reviews hinting it’s simple, thin, and cheaply made. Naturally, I adore it.

Let’s start with Journey Woman’s basics, then get to Opposite Woman’s experience with the fragrance. Journey Woman came out in 2014. Its notes include apricot, jasmine tea, osmanthus, nutmeg, cardamom, jasmine sambac, mimosa, honey, cedarwood, pipe tobacco, saffron, vanilla, cypriol and musk. Amouage describes it as “floral, fruity and leather.”

Some reviews have called Journey a simple fruity floral, really no more than a niche-produced department-store-style fragrance without much interesting going on. Not in my world. I admit that when I first spritzed from the sample vial, the fragrance’s sweet fruitiness repulsed me. Worse, I had a hunch it would stick to my sweater until I tossed it in the wash (this part turned out to be true). However, I’ve found that sometimes the first spray from an atomizer that’s been on the shelf a while doesn’t represent the fragrance well, and that might be what happened with Journey.

When I gave Journey a second try — then a third, then fourth — sure, I smelled stone fruit, but I also got a kick of honey and dry orange blossom, giving the feeling of cold fruit wrapped in soapy suede. Then, the tintinnabulation1 of jasmine grew — lots and lots of lovely jasmine — and the orange blossom’s soapy suede morphed to osmanthus. Among the fruit and muffled flowers I smelled a touch of brown spice. An animalic hint, just a  kitten’s purr worth, grounded the perfume. Over time, the fragrance continued to change, becoming creamier and woodier, and, finally, settling into a quiet woody-musky aura.

To me, Journey is plenty complex and full of texture. The honey and stone fruit stick around a while, but where I usually find that sort of thing off-putting, here it fascinates me, like the jewel-toned cherries and queer green and yellow bits in fruitcake. So far, Journey intrigues me more the more I wear it.

As for body, I don’t find Journey thin at all. Its notes translate into vivid but dim colors that mimic sitting surrounded by stained glass windows and no light but sunlight. (Journey is a big, shapely girl, but despite her lushness, she fades after five hours or so.)

Now for the most mystifying (to me) accusation, that Journey smells like it was made on a tight budget. I don’t get it. I’m not an expert, but there’s something in a fragrance’s depth and texture that tell of the quality of its materials. Let me draw a comparison: I spend way too much time in thrift stores, and I used to work in a vintage clothing store, so I’ve felt a lot of wool in my time. I can run my hand blind over a rack of coats at Goodwill and feel the difference between pre- and post-1980s wool. It’s that way with perfume, and Journey smells like Scottish cashmere feels.

All that said, you might not like Journey, and I definitely recommend sampling before you buy. Maybe Journey is particular and best suits a narrow audience. Or maybe Opposite Woman is more fascinated by fruity floral orientals than she'd thought. I'm okay with that. I’m saving the rest of my sample for a rainy weekend afternoon. When the sample runs out, a bottle might need to replace it.

Amouage Journey Woman Eau de Parfum’s list price is $315 for 50 ml and $380 for a 100 ml bottle. Savvy online shoppers can find it for less. For information on where to buy it, see Amouage under Perfume Houses.

1. With apologies to Edgar Allen Poe's "The Bells."