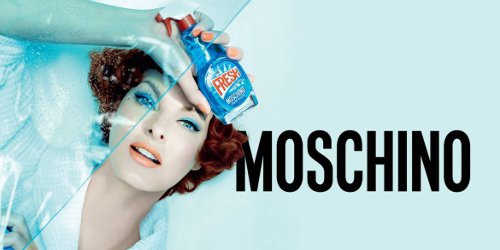 I wanted to evoke the iconography of the most mundane and common of all household cleaners. Fresh captures the irreverence of the brand, arching back to Franco Moschino’s first fragrance ad of the model sipping a perfume from a straw stuck in the bottle. — Moschino Creative Director Jeremy Scott1

Moschino's new Fresh Couture is being billed as a "surprising and ironic" fragrance, and hey, just think of all the surprise and irony (and sure, irreverence, why not) you could pack into the Windex-inspired bottle! The possibilities were endless. The irony here, though, is that the juice hews as strictly to the basic tenets of modern mainstream perfumery as any you might find on the counters at Macy's, and indeed you would not so much as raise an eyebrow if you smelled it being sold under some other, less irreverent brand name, like Calvin Klein or DKNY or even Paris Hilton. In that case of course the bottle would not look like Windex, and the PR would be all about sensuality and strong, multi-faceted women, and the commercial would feature plenty of writhing and/or the clothing and cars and accoutrements of the 1%. Instead, we have Linda Evangelista doing a 1950s housewife,2 but either way, in the end, you get the same mix of sweet berries and non-descript florals. Surprise!

Fresh Couture, the juice, mind you, is just fine. It's not as much fun as the clothes and the iPhone case, but it's fine. They're calling it a woody floral but it's a dead ringer for your average fruity floral. The opening is bright raspberry lollipop with some candied citrus; it's a wee bit shrill for a few minutes but it does settle. It's supposed to have ylang ylang and peony and osmanthus, and perhaps it does. It mostly smells to me like pink perfume flowers, liberally peppered — maybe the pink flowers in the blue bottle is the surprise? It's young and clean-ish and sweet, with a pale musky base (cedar, ambrox and what now passes for patchouli).

Verdict: Whatever. If you love the bottle (and I do) you'll be happy to know that the juice won't kill you. But even within the confines of what they were trying to do — sell a lot of perfume to young people, presumably — they could have done better, and no perfumista will be swayed by the "so luxurious and haute couture"3 of the PR campaign. It does not smell like anybody spent a penny more on the raw materials than was absolutely necessary.

My first thought on smelling Fresh Couture was that Moschino wanted to find its own Daisy, but hadn't quite hit the mark — I swear I had completely forgotten that the perfumer in both cases was Alberto Morillas. Anyway, Fresh Couture is reasonably fine but doesn't come close to the massive, multi-generational appeal of Daisy, and I have to say that while I really do adore the bottle4 — it would be hard to resist if I came across it in TJ Maxx for say, $9.99 — I don't forsee the same opportunity for the endless string of newly decorated flankers that the original (likewise adorable) Daisy bottle afforded. Perhaps they will surprise me. 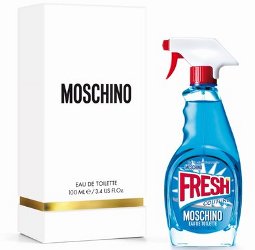 2. And actually, I did not know she was supposed to be a "perfect 1950s housewife" until I read it in Women's Wear Daily. I thought she was just a woman cleaning glass in a bathrobe. Ibid.

4. Some of the 5 ml miniatures have turned up on eBay, and those are even more adorable.