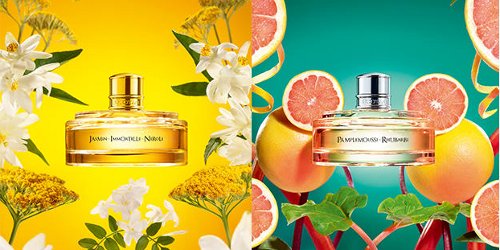 Jasmin Immortelle Neroli and Pamplemousse Rhubarbe are the latest from L'Occitane, part of a new limited edition collection developed in collaboration with pastry chef Pierre Hermé and inspired by summers in Corsica. Both scents sounded tempting (if perhaps not as tempting as they might have been if they'd been inspired by Pierre Hermé's pastries) and I'm happy to report that I liked both of them: a set of scented hand creams was bought and paid for within minutes after smelling them.

A bright, sunny citrus start, then an airy, mostly-clean floral, summer-weight, leaning towards feminine, with the immortelle adding some depth, and just enough of a honeyed golden glow to live up to the visuals, all over a pale woody musky base. It's hardly a jasmine bomb — it's about as jasmine-y as the Jasmin & Bergamot they did for La Collection de Grasse, which is to say, probably plenty for people who aren't jasmine-freak perfumistas, but a lightweight for those of us who are. Likewise, the immortelle is hardly likely to overwhelm anybody (or satisfy any longings for the sadly discontinued Immortelle de Corse). Still, overall it does have a bit more presence and staying power than Jasmin & Bergamot and I do like it better than that one.1

Verdict: Jasmin Immortelle Neroli is a cheerful blended floral, very wearable, and light enough to work well for office-wear. As is frequently the case with L'Occitane fragrances, I smelled it, thought it was awfully nice for a mall chain, then remembered the prices, which are higher than I generally expect for a mall chain (regular readers have read this complaint from me before, and can roll their eyes and move on) and higher than I'd pay for a juice of this sort. Another way of putting it is that I do think you can do far better for the price. I did buy the hand cream trio (I'm a sucker for scented hand creams) but even the shower gels ($20 for 250 ml) struck me as just a shade too dear.

If you and grapefruit fragrances don't always get along, turn your head when you spray and perhaps even hold your nose for a minute: this one has a bit of a sulfurous start. On my skin it settled quickly into a tart, ultra-crisp blend of grapefruit and rhubarb. The slightly-sweaty undertones from the grapefruit are given extra bite by the spices, which are briefly strong, then soft, and lent warmth by the somewhat heavier woody base.

Verdict: I don't know if they're positioning Pamplemousse Rhubarbe as unisex, but they certainly could have — there's nothing feminine about it at all, and some women may find the combination of grapefruit and cedar too masculine to wear. Many perfumistas are already familiar with the pairing of grapefruit and rhubarb via scents like Hermès Rose Ikebana and Eau de Pamplemousse Rose, or Miller Harris Le Pamplemousse, among others. If you liked those, you might well like the L'Occitane too; I certainly do. The warmer, spicier finish gives Pamplemousse Rhubarbe more of a three-season feel, and it lasts quite nicely on clothing. On skin, admittedly, it fades a bit sooner than I like, but then, so do the Hermès entries. I am going to be keeping my eye out for a sale on the body products for this one. 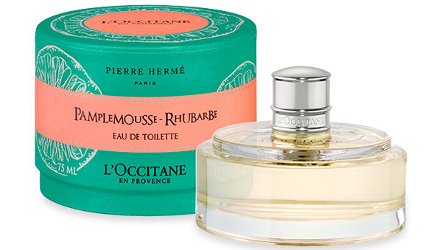 Both scents come in cheerful paper cartons, ready for gifting.

L'Occitane + Pierre Hermé Jasmin Immortelle Neroli and Pamplemousse Rhubarbe are $62 each for 75 ml Eau de Toilette. There are also a variety of body products (some also in a third fragrance, Miel Mandarine) and gift sets. At the moment, $72 gets you the "Collection", a gift set with the 75 ml Eau de Toilette plus Shower Gel, Body Milk and Bar Soap.

1. Happy888Cat commented here that Jasmin Immortelle Neroli "could easily be part of the Grasse collection" and I do think that's absolutely right. It's in a very similar style, quite different from the older Voyage en Méditerranée / Notre Flore collection.