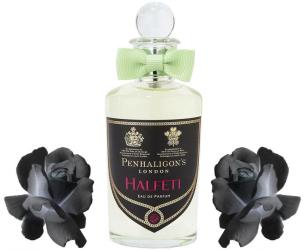 Penhaligon's Trade Routes Collection was inspired by "the luxurious and decadent commodities which were traded through London’s historic docks at the turn of the 19th Century." What comes to mind after reading that teaser? Delicious, fumy liqueurs and spirits, spices and foodstuffs, sandalwood, patchouli, leathers, fabrics and the fabulous plant "discoveries" brought back to England by botanist-explorers. But who knew the ships' hulls had kegs and kegs full of...Iso E Super?!

Halfeti1 was named after the rare black roses that grow near the Turkish village of Halfeti; the perfume opens with strong Iso E Super, with its vague woody aromas. Iso E Super is quickly joined by cumin and saffron (mild, not sweaty). Halfeti does present a leather note with a hint of cypress and a food-y-vegetal-green musk. Halfeti's base smells of tonka beans and vanilla, combined with lingering musk and Iso E Super (together, these notes produce a scent that reminds me of fresh tarragon). No matter how many times I wore Halfeti, its supposed flowers — violet, jasmine, lily of the valley, rose — were in hiding (or blended to near-extinction as "individuals"). Halfeti has SUPER, Iso E SUPER!, projection...it seems the farther away from Halfeti-scented skin you are, the more you smell the perfume. (Halfeti survived on my skin even after a bath.) Overall, Halfeti is  a fuzzy, warm-blanket perfume, not exotic in the least, but pleasant; it's not going on my to-buy list because blatant Iso E Super-heavy perfumes don't rock my boat, even when it's moored at "London's historic docks."

Levantium2 does open with an interesting accord: a rose-violet / absinthe cocktail. A creamy rose note begins to dominate almost immediately (if I didn't know better, I would have assumed this was Halfeti). In mid-development, Levantium exudes a dry, almost-smoky jasmine tea scent (it reminds me of the aromas of Chinese curio shops in L.A.'s Chinatown, with their soaps, teas and incense for sale). There's also a fleeting, syrupy peach / ylang ylang combo and a smidgen of guaiac wood. At the end of its development, Levantium smells of sudsy, rosy-perky patchouli. Levantium is a shade lighter / brighter than Halfeti, and it, to my nose, smells more "trade routes" than Halfeti. Levantium reminds me of summer and bath-time. Levantium has a striking similarity (in scent, sillage and behavior on skin) to Tom Ford Private Blend Fleur de Chine (now discontinued); like Fleur de Chine, I find Levantium too feminine for my taste, but I do like the perfume.

Penhaligon's still smells like a niche perfumery, but, for me, nothing extra-special or original has been released by them in a long time. Penhaligon's: please, give us at least one truly eccentric perfume...soon.