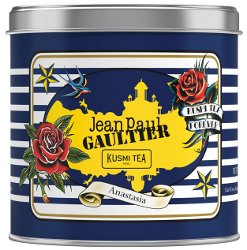 It's been a good long while since we've talked about tea other than as an aside in the scent of the day polls. I used to post on the subject more frequently (even though I am no more an expert on tea than I am about perfume), and especially about green teas, which were my staple drink during the day. Those cups (not telling how many, let's just say quite a few) were interspersed with heavier bursts of caffeine from the occasional latte. I've since had to give up coffee entirely, and not surprisingly, my collection of black teas has increased accordingly. I hope to do a post on Earl Grey teas soon, but today I'm concentrating on three black teas from the Russian-inspired French brand Kusmi, which as it happens was the subject of my last tea post.

I have a fair sized list of "to try" teas from Kusmi, and Anastasia was already on that list when they announced earlier this year that designer Jean Paul Gaultier would be "decorating" two limited edition tea caddies for Kusmi. Anastasia (shown at top) turned out to be one of them,1 and I had the large tin on its way to me in no time.

And I do like Anastasia, but possibly not so much that I needed 8.8 oz of it. It's a citrus black tea, and while it has a good amount of bergamot, it's not a traditional Earl Grey since it also has lemon, lime and orange blossom. The primary flavor, to me, is lemon-lime, and while it's not overwhelmingly sweet, it also has a sort of sweetish fruity undertone, along with a definite floral aftertaste. Meanwhile, the base tea is not as assertive as it is in some of the other Kusmi blends. If you have any tendency towards associating lemon and lime with cleaners and / or soap, you might not adore Anastasia — I do find that it tends towards soapy, and I have to be in the right mood to want to drink it. I take mine with a splash of cream. I'm guessing it would make a nice iced tea, but I have not tried it that way yet.

The 8.8 oz Kusmi Anastasia tin is sold out; the 4.4 oz tin is $18.50. I assume when that sells out, they'll put the "regular" Anastasia tins back on the web store. I am not positive but I think they were about a dollar cheaper?

Traktir is a smoked black tea, but it's no more than lightly smoky, with no meaty / bacon undertones whatsoever. It's flavored with citrus and spice (bergamot, citron, orange, cinnamon and clove). The citrus and spices are likewise subtle; Traktir has lots of body but the most assertive flavor is tea — you won't mistake it for a chai or an Earl Grey. It makes a lovely afternoon tea on a chilly day, and although I have less to say about it than I do about Anastasia, I reach for it far more often.

Zoubrovka is a tea flavored with buffalo grass, aka sweet grass. I tried the green tea version ages ago, and did not care for it so I sent it to Kevin, who sent me back some of the black version. I didn't really fall right in love with that either, but I wanted to use it up, and eventually it grew on me and I've now been through several tins. The buffalo grass gives the tea a fresh grassy flavor, almost-floral, almost-earthy, almost-vanillic — it tastes like tea taken outdoors on a summer day. I tend to reach for it in the late afternoon, and it is one of the few black teas I drink without milk or cream. I thought it would make a great iced tea, but it's too bland when chilled.

Do comment with your favorite tea, if you have one!

1. The other Jean Paul Gaultier tin is Prince Vladimir, which is an Earl-Grey-ish variation with vanilla and spices. It is not a favorite of mine — for whatever reason, I don't seem to like pronounced vanilla in my tea — but I would not be surprised if it is one of the brand's best sellers.