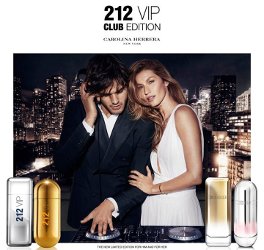 212 VIP Club Edition ~ "Carolina Herrera 212 VIP Club Edition EDT is bewitching and sensual, and urban fragrance for summer clubbing with a seductive opening of citruses and black currant sorbet melting into the heat of Jasmine Sambac and jasmine petals gently laying on a base of patchouli and white musk." In 80 ml Eau de Toilette.

212 VIP Men Club Edition ~ "212 VIP Club Edition for Men is a fragrance of party attitude and urban appeal. The top notes are ozonic–icy accord and lime caviar. Nutmeg wood and pepper form the heart of the composition, while the base notes include gianduia chocolate and king wood." In 100 ml Eau de Toilette.